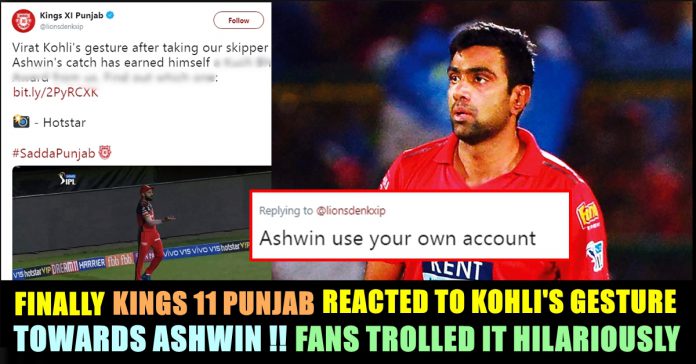 Virat Kohli hogged the limelight for all the wrong reasons after the thrilling game between Royal Challengers Bangalore and Kings XI Punjab came to an end on Wednesday. Emotions ran high throughout the game as both the captains – Kohli and Ravichandran Ashwin – led the show in charged up manners. Both the captains looked animated throughout but it was Kohli who had the last laugh although he faced criticism for the very same reason. 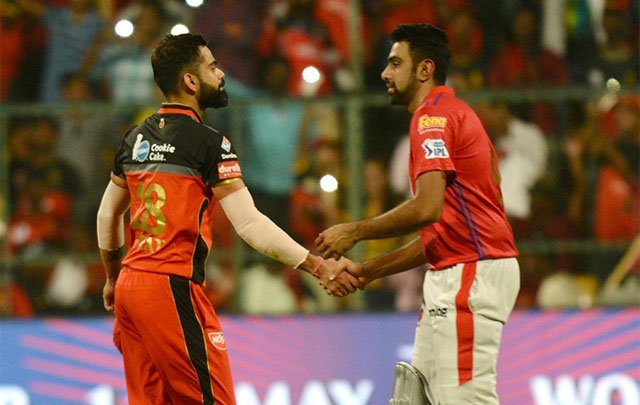 It all happened in the very final over of the game when Kings XI Punjab needed an improbable 27 runs off the final over with Ravichandran Ashwin up against Umesh Yadav. Ashwin started the over on a fine note by hitting a six. He went for the maximum on the following delivery too but ended up miscuing it to Kohli at long-on and it led to some wild scenes. A charged-up Kohli did not refrain from giving Ashwin an animated send-off while also hurling some choicest of abuses.

Now after many days Kings 11 Punjab twitter handle came up with a reply to this gesture of Virat Kohli. In their tweet they said “Virat Kohli’s gesture after taking our skipper Ashwin’s catch has earned himself a Kuch Bhi (anything) Award from us”. They also added an article which gace parody awards to the players. 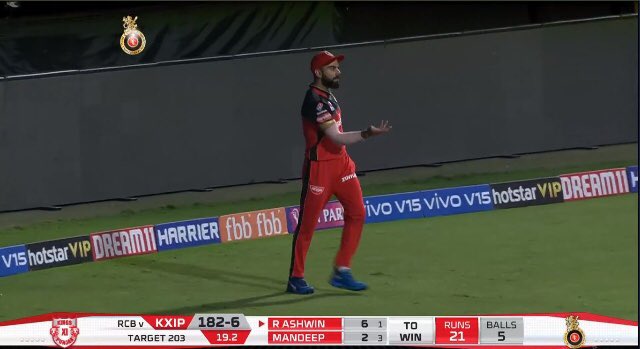 Virat Kohli’s gesture after taking our skipper Ashwin’s catch has earned himself a Kuch Bhi Award from us. Find out which one: https://t.co/eFDfg3kD2f

after his already mankaded odi career ..i guess he wants his test career to get stumped out !!!

Give ur captain Mankad award..

Talk about your SO CALLED SKIPPER’s reaction after getting out 😌

Meanwhile some of them criticized Kohli for his aggressive behaviour as well :

He is a good batsman but he will never be like Sachin n Dravid.

Kohli deserved to lose matches for his adamant and arrogant behavior.

Royal Challengers Bangalore’s twitter handle shared the post and captioned it as “Kuch bhi” (anything) as well :

What do you think on this hilarious reactions ?? Comment your views below !!

Since the start of Bigg Boss Tamil 3, the show has been grabbing headlines for different reasons. The Kamal Haasan hosting reality television show...