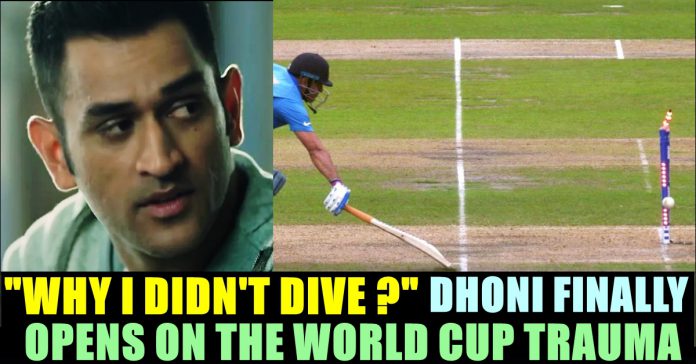 Dhoni, the cricketer who has a huge fan base in world cricket played his final ODI world cup tournament in 2019. His run out in the semi-finals match against Blac caps shattered the dreams of Indian fans. It devastated the fans in the stadium as there was a pin drop silence in Manchester crowd. The two day international world cup semi finals match went in favours of the black caps due to the top order collapse for the first time in this world cup. Three of the top order batsmen scored just 1 run and got out while chasing just 240 runs in 50 overs.

Kane Williamson’s brilliant captaincy was lauded all over the Internet. When India struggled at one point and seemed to lose the match by large margin, it was Ravindra Jadeja and Dhoni’s partnership which kept the hopes of billions alive.

Jadeja played the knock of his life time and got out while trying for a big one in Boult’s over. Dhoni who has done it for many time as Sourav Ganguly in the commentary said got run out by Martin Guptil’s sharp direct hit throw. Since that match, Dhoni is yet to enter the cricketing field as he made himself unavailable for the team in the series played by the team.

Now for the first time, the cricketer has opened on the trauma he went through after losing his wicket in the semis. On being asked by India Today Consulting Editor Boria Manjumdar about the dismissal, Dhoni has answered to it. “In my first game I was run out and this time again I was run out. I keep telling myself why I didn’t dive. Those two inches I keep telling myself, ‘Dhoni, you should have dived” The former captain told to Manjumdar.

Watch the run out here :

#MSDhoni has opened up about his run-out (Semi-final, World Cup 2019) in a recent interview.

As soon as the cricker’s statement surfaced on Internet, fans of him couldn’t keep calm as reactions started pouring to it from every direction of the Internet. Check out some of the reactions below :

This does still hurts more than breakup 😢😢 pic.twitter.com/lsIY7TxT7E

What do you think on these words from the legendary cricketer ?? Comment your views below !!

Actress heroine who is known for appearing in "Aadukalam" has been expressing her views on the JNU attack on students and teachers. Masked goons...