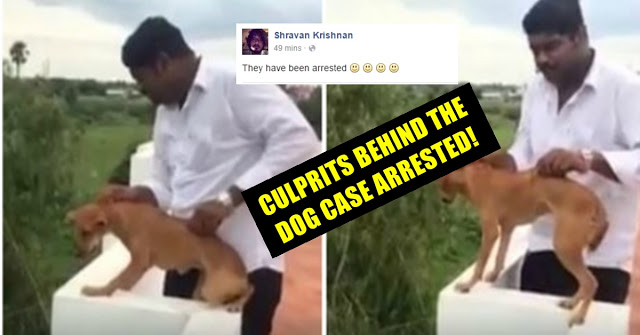 Finally After 2 Days The Culprits Behind The Dog Throwing Case Are Arrested By The Police! Here’s The Full Story!

The pup who was thrown off a rooftop in Chennai has been found alive. One of the animal rights activists involved in the pushing for social media attention and police action on the issue posted a picture late on Tuesday night, saying the pup is unable to walk properly and that she is presently receiving medical attention.

The dog has also been named as Bhadra by Shravan & his team..!
Today(6/7/2016) as we woke up we were happy on seeing one of Shravan’s post on facebook which stated that the culprits have reached Chennai and will be arriving to the police station by 12PM in the noon today..

In his latest post he has told everyone that the culprits have been arrested and taken under police custody!

We Team Chennai Memes is very very happy to know that dog Bhadra is safe and sound.. As well as for the culprits being taken custody by the police.. Do drop in your views at the comment section below..!

Previous articleShocking : Major Accident Happens At The Chennai Airport For The 64th Time! Check Out What It Is..
Next articleNew Twist In The Swathi Murder Case..Ramkumar Denies Killing Swathi.. Who Is The Real Killer.. Read Here!