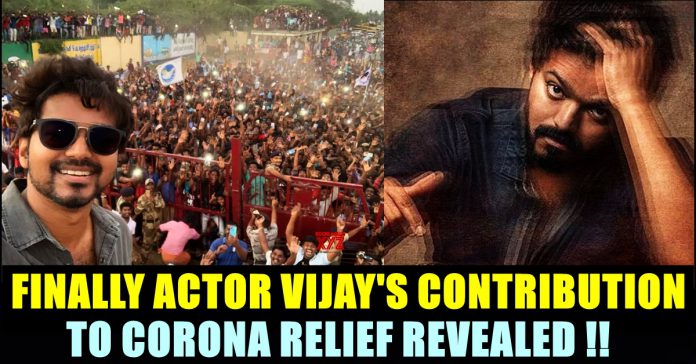 So many speculations kept surfacing regarding the contribution of Actor Vijay, one of the highest paid actors of Indian film industry. We have seen videos the workers of FEFSI requesting him to contribute as well. As nearly a month completed since Corona lockdown, actor Vijay has officially announced about his contribution now. As expected, the actor has provided a huge sum of amount to governments of South Indian states and to FEFSI union.

FEFSI has more than 20 unions, consisting more than 25,000 workers film technicians from different branches of filmmaking such as lightmen, makeup artists, choreographers, dancers, stunt persons, junior artists and others. Actors Sivakarthikeyan, Vijay sethupathi, Suriya donated Rs.10 lakh each for the people who are suffering from their industry. Superstar Rajinikanth gave Rs.50 Lakhs. Raghava Lawrence provided Rs.3 crore and became the highest donated member of Kollywood. In that 3 crore, Lawrence gave Rs.50 lakhs to PM cares, 50 lakhs to CM relief, 50 lakhs to dancers union, 25 lakhs to physically abled boys and 75 lakhs to the daily labour’s and for the people from his birthplace Royapuram, Desiyanagar.

Actor Ajithkumar gave Rs. 1.25 crores as his part. The actor reportedly provided Rs.25 lakhs for FEFSI workers and Rs.50 Lakhs for CM fund relief and Rs.50 Lakhs for Prime Minister relief fund. In addition to the amount, Ajith also provided Rs.2.5 lakhs for the PRO union. On seeing all these stars donating to FEFSI union and for central and state government, fans of actor Vijay expected him to donate a huge sum of amount. However the actor is keeping mum till date. Many users of social media said that the bank accounts of actor Vijay has been restricted not to make any transactions due to the IT raid which took place at his home lately.

Now, an official update on the actor’s contribution to the coronavirus lockdown has been surfaced. He reportedly provided a whopping amount of Rs.1.30 crores for the relief of Coronavirus. He divided the amount in the following order to help the entire South India to combat the virus :

Actor Vijay was last seen in Atlee’s Bigil and is all set to appear in “Master” post lockdown. He also signed a film with Sun Pictures as his 65th film which is going to be a sequel of his blockbuster film Thuppakki. A.R Murugadoss who directed the first part was committed to direct this film.

Actress Ritika Singh reacted to the enormous number of comments from her followers who called her as "Noodles Manda". Ritika Singh one of the...