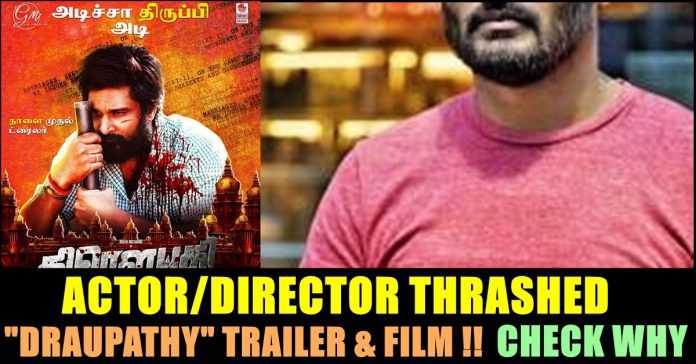 The trailer of “Draupathy” released recently and has instigated a debate in social media. The portrayal of caste in Tamil films has been raised in large number in recent times. While films like Pariyerum Perumal, Kabali from Pa. Ranjith emerged to express the caste oppression that still takes place mostly from rural part of the Tamil speaking state, films which celebrate a particular caste are also continues to be made. “Draupathy” happens to be the latest one to join the list.

The trailer which was released recently suggests us about the plot of the film. It vaguely tells that youngsters from “lower” caste are luring the women of upper caste groups in order to lead a wealthy life. The film has Rishi Richard and Sheela in the lead roles. Mohan G who previously directed Pazhaya Vannarapettai has directed this film.

More than the trailer, the response it is receiving from all over the state is scary as most of them are praising it with their whole heart. It is very much evident through the comments it has been receiving in the youtube platform.

It also created debates in the micro blogging social media site, Twitter. Now, one of a user has requested director Naveen, to comment on the same. Naveen is known for making “Moodar Koodam” which was widely appreciated by the fans. He is now busy in making “Agni Siragugal” by having Arun Vijay and Vijay Antony in the lead roles. The user named as Kalyan wrote “சார் திரொளபதி படத்தை பற்றிய தங்களது கருத்து… தயவுசெய்து…🙏🏼” by tagging the filmmaker.

As a response to this tweet, Naveen who took time to reply to it has said that the film is just a garbage and he has nothing to comment on it. “குப்பைகள் குறித்து கருத்து வேற சொல்லனுமா?” he wrote in his tweet in a way of mocking the film’s trailer.

Meanwhile Vijay antony, a popular musician who is now busy in acting has supported the film through his official twitter account. It is notable that he is going to be featured as one of a protagonist in Naveen’s upcoming film. He wished the director in his tweet :

What do you think on these reactions the trailer is receiving ?? Comment your views below !!

Previous articleJadeja Tried To Troll His Teammate For Lifting Less Weight !! Check The Reply He Got !!
Next articleParthiban Slams Vikatan With His Tweets !!