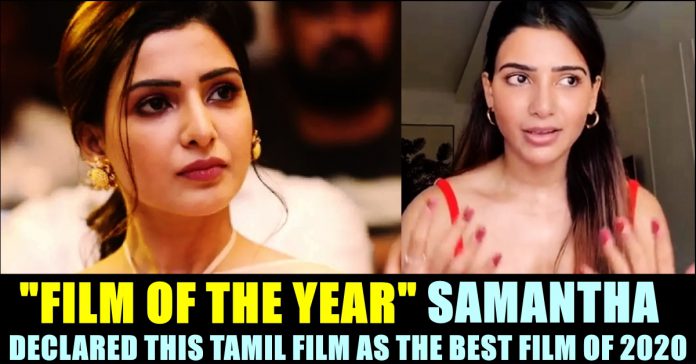 Actress Samantha who is busy acting in films for Tollywood industry, was last seen in Thyagaraja Kumararaja’s “Super Deluxe” in Tamil. However, the actress is closely watching the products of Kollywood amidst her busy schedule it seems. She who enjoys crores of followers in social media platforms, uploaded a poster of a recently released “Soorarai Pottru” and declared it as a best film of the year. Samantha acted with Suriya in a number of films including “Anjaan” and “24”.

Despite of being a part of some of the best films this year, Samantha gave it to “Soorarai Pottru” for its intense content. Days ago, Tollywood star Vijay Devarakonda also appreciated the film with his whole heart by posting a series of tweets. Samantha, in her tweet, said that the film is outstanding and added that the inspiration the film provided is the need of the hour for her.

Suriya’s “Soorarai Pottru” released in Amazon Prime only to make the fans of Tamil cinema go gaga over it. It became the first Tamil film to have a background of flight, airport and airlines as its core plot. On seeing a top-tier actor’s film getting released after a very long time due to COVID 19 outbreak, fans of Internet became extremely happy and watched the film overnight. Reviews for the film are pouring from all the directions of Internet since the release.

The film impressed the audience in so many ways. While appreciating the film, Samantha wrote “Film of the year #SooraraiPottru . What a gem 🔥.. @Suriya_offl 🙏🙏🙏 #SudhaKongara ❤️❤️❤️ @Aparnabala2 🌸.. @PrimeVideoIN.. Outstanding .. just the inspiration I needed”

The part where Bommi(female lead)working on her own dreams rather than living in her husband’s shadow could have inspired Samantha. On seeing this post, Tamil cinema fans ot extremely happy along with Suriya fans.

Surya is fav actor of Sam,infact she had crush on him in college days 😍😍
Such a cute pair ♥️

Dhiwaharan Palani - January 21, 2021
0
Abhirami Venkatachalam, former Bigg Boss contestant and model came up with a couple of Instagram stories lashing out at people who "slut...