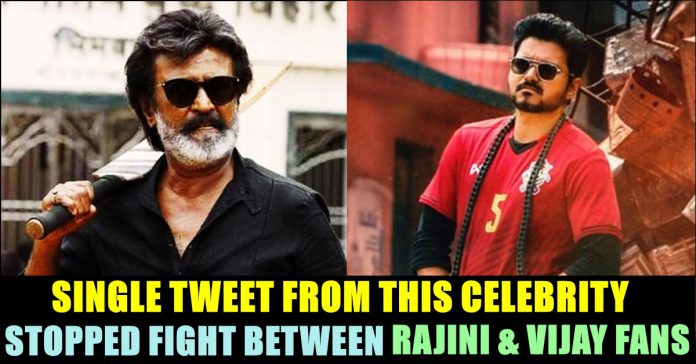 Fight Between Vijay & Rajini Fans !! Celebrity Solved It With Ease !!

Lyricist Vivek is one of the very few celebrities who is very much interactive with his followers in social media platform. Vivek is now the much-sought-after lyricist in K-Town. The young talent made his debut with Siddharth’s Enakul Oruvan in 2015, and in a matter of three years, he has become a leading song-writer in the Tamil film industry.

Within a short span of time, Vivek has started working with almost all the leading music directors of Tamil cinema including Anirudh, AR Rahman, Yuvan Shankar Raja and Harris Jayaraj. He is being appreciated for his versatility in the work he do. On the one hand, his songs like Poo avizhum from Enakkul Oruvan and Ennadee Mayavi Nee from Vada Chennai are being lauded for its poetic appeal; and on the other hand, his works like Aaala Poran Tamizhan from Mersal and Marana Mass from Petta are being appreciated for having mass appeal.

His recent works such songs “Verithanam” and “Chumma Kizhi” for actors such as Vijay and Rajinikanth respectively is widely celebrated by the fans of the actors. However the lyricist became very much attached with the fans of actor Vijay since the wrote “Aalaporan Tamizhan” which went extremely viral.

Recently, the lyricist posted a tweet from his account in a funny manner. He said “மாப்ளேய்.. வணக்கம் டா மாப்ள டிவிட்டர்லேர்ந்து 🤙🏻🤪”

To this tweet, one of a fan of actor Rajinikanth made a meme to mention that Vivek is replying only to Vijay fans and not considering the fans of Superstar.

This tweet which grabbed the attention of Vivek made him to reply by saying that he treats everyone as same. Check out his tweet here :

Ha ha. I never think like this. I try to reply to all who speak with me 🤗🤗🤗 https://t.co/ffDewLPL3C

Unexpectedly, a vijay fan intervened the conversation and said that Vivek belongs only to the fans. “Vivek anna enga property ❤”

To this reply, the lyricist replied with a hilarious meme template of comedy king Vadivelu which made many of his followers laugh their heart out.

I wish everyone loves me the way yo do 🙏🤗😘 #Peraasai 😃 https://t.co/hhPSiJbwqK pic.twitter.com/bAGSvFfLFe

The way Vivek turned a potential ugly fans fight situation into a hilarious moment loved by the fans of both the actors. It is notable that Vivek often tried to unite the fans of Ajith and Vijay. (Also Read : Lyricist Vivek Trying To Unite Vijay, Ajith Fans !! This Will Melt Your Heart For Sure !!)

What do you think on this gesture of this emerging lyricist ?? Comment your views below !!

Previous articleBlue Satta Took Revenge For Trolling Him In The Movie ??
Next articleKavin Agreed With Selvaraghavan In This !!

Tamil Bigg Boss went past 30+ days and the most controversial contestants of the house such as Vanitha Vijaykumar, Meera Mithun. Mohan Vaidhya got...

Nasser Al Azzeh who rose fame through the sketch videos he releases in his youtube channel "JordIndian", came up with a shocking video in...