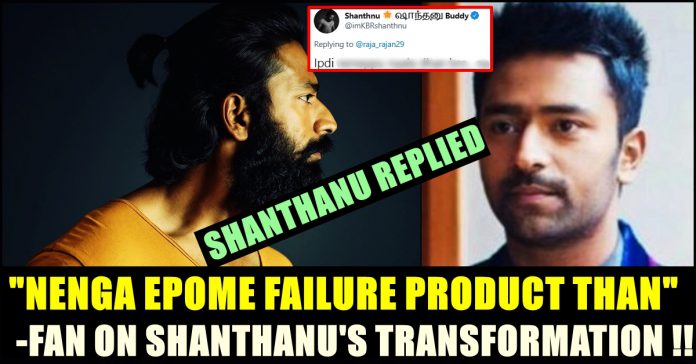 Shanthanu’s nature of being very much interactive with his followers in Twitter made him to reply to a twitter user who spewed unnecessary hatred at him. The emerging actor recently happened to tick one of a main box in his bucket list which is sharing screen space with Thalapathy Vijay. He got the opportunity to act in “Master” along with Vijay which is being directed by Lokesh Kanagaraj.

Shanthanu is very much known for having friendly conversations with his followers in Twitter. He directly answered to many of their questions, including to the one on how he missed the opportunity of acting Subramaniyapuram at the initial stage of his acting career. Now he posted a couple of pictures of himself from his recent photoshoot. In the pictures uploaded by him, the actor looks dashing with his new look in which he can seen having a long beard and ponytail, unlike his previous getups.

While uploading the pictures, Shanthanu wrote “Rule #1 When you are in silence, let others think your losing ! You may be tired , physically & emotionally drained .. but u have to go thru the worst to get the best” as caption.

When you are in silence, let others think your losing !
You may be tired ,
physically & emotionally drained .. but u have to go thru the worst to get the best🔥

Though the post received more than five thousand likes as soon as it got surfaced, one of a twitter user blatantly spewed hatred on the actor by saying that he is always a “Failure product”

This tweet grabbed the attention of the actor himself who remained calm while replying to him unless other celebrities who could have blocked or blasted at him. Shanthanu, in his reply said, that the guy is hiding behind a display picture of football player Messi only because of his negative thoughts. “Ipdi neneppu naala dhan bro , na dhairyama en moonjiya kaatren, Neenga dp pinnadi oliyireenga Smiling face with smiling eyes
Sleep peacefully today as you have given your quota of negativity to someone today Smiling face with smiling eyes” Shanthanu replied.

This reply comment from Shanthanu gained him more likes and positive replies from his followers. Many of them asked the actor to ignore negativity as Thalapathy said. Born to veteran filmmaker Bhagyaraj and former actress Poornima, Shanthanu debuted as child artist in his father’s movie “Vettiya Madichu Kattu”. Apart from “Master”, Shanthanu is expected to appear in “Raavana Kottam” as protagonist.

Comment your views on the way Shanthanu handled the situation !!

Previous articleShruti Haasan’s Bold Reply To Those Who Commented On Her Physique !!
Next articleFor The First Time, H.Raja Recommended A Tamil Film !!

Elon Musl who has been making headlines across the globe ever since becoming the owner of the micro blogging social media site Twitter, on...

Ponniyin Selvan is one of the most expected project of ace filmmaker Mani rathnam. The director who concentrated on character driven drams for past...