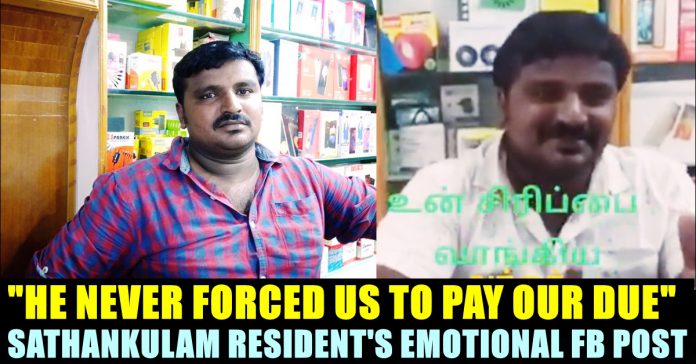 People of Sathankulam fired crackers to celebrate the arrest of sub inspector Raghu Ganesh. Three other cops including Bala ganesh who were responsible for the custodial death of Jayaraj and his son Fenix have been booked by the crime branch-CID police on Wednesday and the look out for them is on.

Sources said that CBCID had booked six people under Section 302 and other sections of the Indian Penal code. Jayaraj and Fenix’s relatives, friends and the residents of Sathankulam said this was first success they had tasted. They added that the fight will continue till all the culprits who are responsible for the death gets arrested.

Earlier, CB-CID team visited Fenix’s mobile shop was checked the place from where his father was picked up by the police on June 19. The team then split into two, One team went to Fenix’s home and conducted an inquiry with his Mother and the second team went to the sathankulam police station.

Meanwhile JP Terry, a resident of Sathankulam who has been constantly voicing out against the murder of the duo in Facebook, has remembered Fenix and his kind heart at this time through one of his Facebook post. Fenix, a 31 year old youth was all set to get married in two months and was the only son in the family. He who tried to rescue his father from getting beaten up by the Police officers of Sathankulam, became prey to their sadistic, psychotic behaviour during the wee hours of 19th June.

The Police officers tortured them with lathis and beaten them black and blue after stripping their clothes off. Fenix’s elder sister Perisis, after seeing the bodies on the night June 24, has said “Munnadiyum Pinnadiyum onnume illa” (There was nothing left on the front and rear of the bodies) to the reporters in Tuticorin. This crime committed by the police officials grabbed nationwide attention and head constable Revathi stepped forward to be a witness against her colleagues.

Now, recounting how Fenix behaved with the people of his town, JP Terry said that helped the society and is still protesting for justice even after his death. “Village people and financially oppressed people of our neighbourhood would visit Fenix’s cell phone shop to recharge and to buy new cell phones. The way he provided cell phones to poor people with limited monthly due amount and without interest made them to visit his shop. He wouldn’t discriminate people according to their Caste and religion while helping.”

“He never forced people to pay their due amount when they couldn’t. He would ask them to pay only when they able to pay it. As he studied Master of Social work, he lived by helping the society with what he had. Even after leaving the earth, he is still protesting to make sure that the injustice happened to him, should never occur to another human being” read JP Terry’s post.

Earlier, Suchithra who is constantly voicing against the Police officials of Sathankulam, shared a video of Fenix dubbing it as “last tik tok video of Fenix”

BIGG BOSS Nithya Said That She Has Admin For Her Twitter !! Check Actress Kasthuri’s Reaction !!

K.V Anand's Kaapan which is the third collaboration of himself with actor Suriya is running successfully in theatres. Starting his career as cinematographer, K.V...

“Aari & Sanam Will Be My True Friends” – Anitha Sampath Opened

Anitha Sampath who got evicted from the Bigg Boss house, opened on her experience in the show while interacting with her Instagram followers. She...