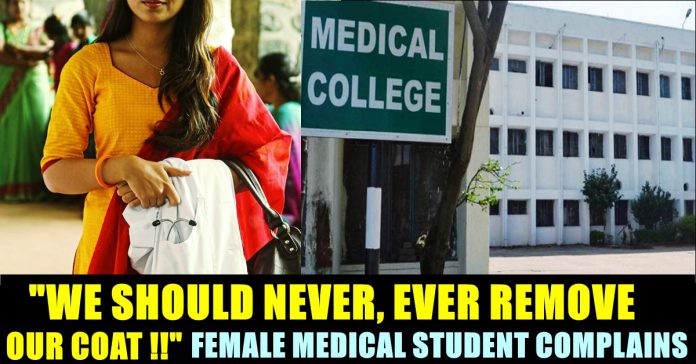 Singer Chinmayi who has been sharing the messages she is receiving from women who are becoming a subject to sexual harassment, has shared a complaint made by a female medical student in her official twitter account. Since initiating the #MeToo campaign in South India by accusing influential poet Vairamuthu for sexually harassing her, Chinmayi has been receiving enormous number of messages from women who wants to stay anonymous. For past 2 years, the Singer has been constantly sharing the messages to let public aware of the problems faced by women. Now, she shared a message sent by a female medical student who found the rules and regulations of her college as “Crap”.

The student, in her message, has said that they are getting fined if they miss to follow the dress code regulations of the college located in Chennai. She complained about the prohibition of female attires such as leggings in her college. The coat used by the female students of medical graduation in her college should not remove it even if they are wearing a dupatta, she complaints.

She further stated that male deans and HODs are controlling the female faculties who are supporting the students. “They were scolded severely for not keeping us in “check” the student wrote in the message sent to the Singer and dubbing artist.

If any of the dress code regulations were violated, the college management is collecting a fine amount if Rs.100, according to the screenshot shared by Chinmayi. The student also said that the female faculties of the college were manipulated by male authorities and are forced to collect money from the students if they fail to follow the dress code.

Check out the screenshot shared by Chinmayi below :

“The female faculties were silenced and manipulated by their sexist rules. They won’t visit a doctor because of the way she is ? Woah. Doctors should be decent. Neatly dressed. Must not talk a lot. Should have their hair tied. Crap” she wrote in the message.

Sharing the screenshot, Chinmayi, expressed her disappointment over the rules and regulations of the Chennai college with her “Slow clap”. “A medical college in Chennai and policing female doctor’s clothes. Slow clap.” her tweet read.

Check out thetweet shared by the Singer below :

A medical college in Chennai and policing female doctor’s clothes.

This tweet from the Singer received various kind if reactions from her followers in Twitter. Clinical Pharmacist Prashanthi said “Most of health professionals rules such as hair tie , no nail varnish and skirt length up to knees for infection prevention and make us look professional. I can’t relate to other rules but they should ask faculties to justify.” in her reply.

These are the rules of MGR univ.For males, the dress code is light coloured formal shirts and dark coloured formal https://t.co/B9OAPaCznr jeans or tees allowed. Shoes compulsory.And they aren’t allowed to remove their coat either.This is like asking why uniforms in schools!!

Most of health professionals rules such as hair tie , no nail varnish and skirt length up to knees for infection prevention and make us look professional.

I can’t relate to other rules but they should ask faculties to justify.

What’s stopping you from telling which college it is.

Of course you need to tie your hair!! Wear your coat. Do you want your hair to sweep all over the patient bed?
I have heard lot of incidences where patients misbehave with female doctors. Although it’s not the doctor’s fault, dress code is also a way of treating a patients.

Not many days ago, Chinmayi shared the messages sent by a student who said that her lady principal accused her for having an Instagram account. The principal who said to the girl that boys will morph her photo, threatened the student saying that she is going to tell her father about it.

I am flummoxed with this. A lady principal tells a girl student to not be on Instagram because even ‘her class Male students can morph her photo.’ No wonder girls internalize this. How is it the onus of the girl that MAYBE her OWN classmates she studies with are used as a warning by her school for just having a social media account but Principal aunty has a problem. In addition – LADY principal threatens the girl that she will LIE to her father that her own daughter is ‘misusing’ Instagram. What sort of crappy human being does that? May I also tell you – not everyone is happy to see other girls free. And it includes women brainwashed by patriarchy.

Comment your views on these complaints made by the female students !!