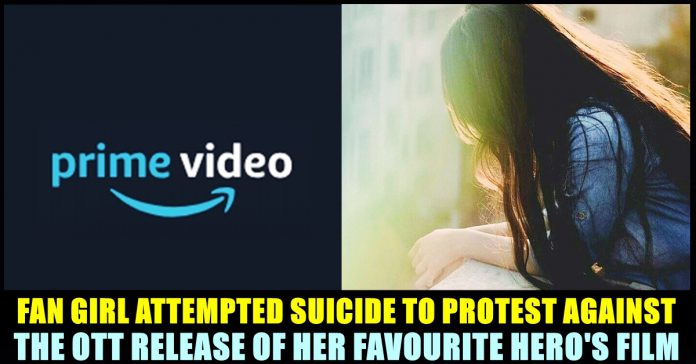 Disturbing video of a female fan named Sunitha, requesting the producer of Venkatesh’s upcoming film “Naarappa” to make the film release in theatres is going viral in social media platforms. The video shows her talking about the hard work of Venkatesh and releasing the film in theatres instead of OTT platforms and she also could be seen hurting herself with a sharp object with blood shedding. Many could be seen slamming her for involving in such act and several people requested her fellow fans not to encourage such act.

Amidst the lockdown that has been implemented in several states of the country to prevent the spread of the COVID 19 interview, film industry got affected unimaginably. Several films of top tier actors which were supposed to release in the big screen, are being sold to OTT platforms to reduce the financial loss. As far as Tamil films are concerned, Dhanush’s “Jagame Thanthiram”, Suriya’s “Soorarai Pottru” released in online platforms. Sivakarthikeyan’s “Doctor” is rumoured to stream in Disney plus hotstar and several other films are lined up for OTT release as well.

Recently, it was announced that Telugu actor Venkatesh Daggubati’s two upcoming films “Naarappa” and “Drishyam 2” were locked to release in OTT platforms. Reports suggested that both the films were sold for Rs. 70 crore. “Naarappa” remake of Dhanush’s “Asuran” is expected to stream from 24th of July, according to reports. However, fans of the actor got deeply upset over the decision made by the producers, it seems.

With many demanding producer Suresh Babu to forget releasing the film in OTT and asking him to hold the film of theatrical release, a female fan named Sunitha went on to take an extreme step to protest against the producer’s decision. She who hails from Renigunta almost attempted suicide and requested the producer to release the film in thetares.

“We are waiting to see our favorite hero on a complete mass avatar for a long time. He may have worked really hard for the film. The movie should release in theaters. We want to watch the movie in theaters only. I am begging Suresh Babu to reconsider his decision,” she said in the video which is going viral in social media platforms.

#Venkatesh Babu Cult Fan Sunitha From Renigunta Attempted Suicide Today Afternoon in Her Residence Due to #Narappa Releasing in Direct OTT Platform
We Request Everyone Not To Do Such Type of Incidents
Wishing You a Speedy Recovery Sister@theVcreations @baraju_SuperHit pic.twitter.com/w651jw8n4V

It has been reported that an official agreement has been made between the producers of “Naarappa” and Amazon Prime. Many people who witnessed the video, condemned the girl fro involving herself in an insane act and suggested public not to encourage it.

Previous articleScreen Grabs From Club House Creates Shock Waves In Other Social Media Platforms !!
Next articleWho Is Bruno ?? Why Celebrities Are Trending #Justice For Bruno Along With Public ?

We are witnessing many kind of posts and videos in social media from people who are trying to keep themselves engaged. But Julie of...