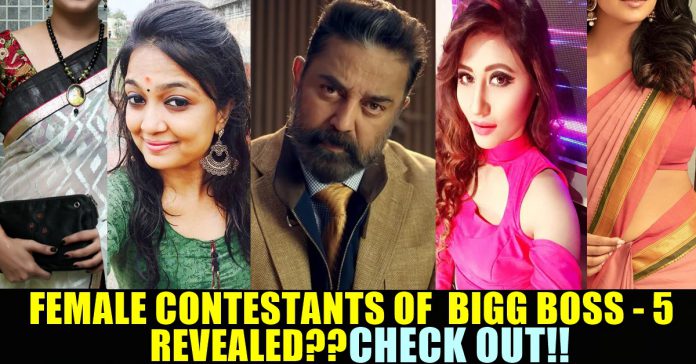 People have started becoming curious about Bigg Boss – 5. Many have started guessing the contestants already. Suspected contestants’ Instagram and Twitter uploads are keenly observed by the people. Already people have confirmed the participation of G P Muthu when a photo of him with a background of Bigg Boss was circulating on social media. People are trying their level best to extract the participation of celebrities through Instagram and Twitter interactions. The show hosted by Kamal Haasan has a huge fan base.

A mere guess of the female contestants has been put forward on Youtube. Here is a list of participants mentioned in the video. Suzane George, who acted in movies like Mynaa and Raatchasan has said to be roped in for the show. Suzane has also appeared in television soaps. In Vijay TV she acted in serials like Saravanan Meenatchi, Aandal Azhagar, and Pagal Nilavu.

Speculations about the participation of Cooku with Comali fame Sunitha might find a place in the Bigg Boss house.

Either Singer Soundarya, who appeared in Super Singer and in Pagal Nilavu serial, or Nithyashree of Super Singer fame are guessed to be participating.

Singer Swagatha or Peraanamai fame Vasundhara can be expected in the show.

Mynaa Nandhini is said to have given her confirmation to participate in Bigg Boss – 5.

Actress Aishwarya Bhaskaran, known for her roles in movies like Ejamaan, Aaru, Abhiyum Naanum, Cooku With Comali fame Deepa Shankar, and Actress Chaya Singh who has acted in Thiruda Thirudi can be expected in this season.

A video was released on Youtube with the complete details of the female contestants.

Previous articleAfter Seeing The Wedding Pictures Of Their Daughter, Parents Committed Suicide
Next article16-year Old Boy Eloped With A Minor Girl And Gets Thrashed By Mob

Fans of actor Vijay has been attacking actress Pooja Hegde through the comment section of her recent posts as she didn't upload any post...