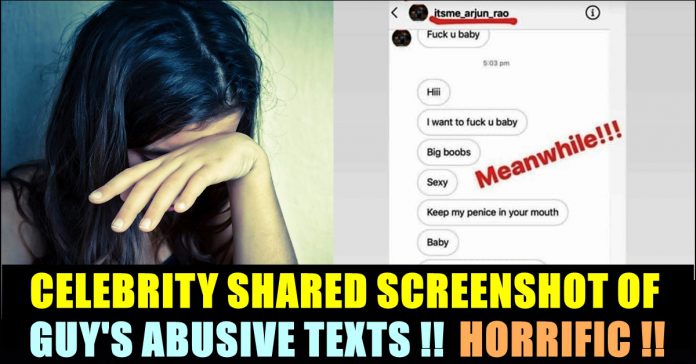 As we all expecting for a severe punishment to criminals who raped and murdered Doctor Priyanka Reddy to reduce the number of crimes against women, the screenshots shared by Chinmayi shows that it is not going to reduce in near future. The first screenshot the singer shows a guy named as Arjun harassing a girl through direct message in Instagram.

The girl who shared the screenshot to expose the guy wrote “Every single women in the public eye get DMs from men just like this. We don’t complain. Because If I did, then I had to sit in the police station all day, everyday. Or rent the upper portion of a police station and move in”

Chinmayi shared the story with a caption saying “Meanwhile!!”. Followed by this, Chinmayi shared another screenshot of a woman who shared a trauma she went through in London. The woman who was travelling in a train got harassed by a guy who later masturbated infront of her. The whole incident happened when the woman was wearing a hijab.

To our shock, the singer shared few more stories in which one of them reported about a guy trying to misbehave with his sister who is a daughter of his father’s brother. The incident happened to the victim when she was in her 15. The woman says that she wanted to kill him but remained calm due to the concern over her father’s relationship with his brother.

A similar incident happened to one more woman who shared the incident she faced with her brother.

Chinmayi shared a story of one more woman who shared an incident happened to her in a train. She explained how a random guy helped her from an abuser by pretending like a guy who is known to her.

It is high time for men to realize that it is not at all a way to approach a woman. Apart from her dubbing works and singing works, Chinmayi is highly recognised by the Tamil people for her existence in social media. Being a representative of South India for Me Too movement, Chinmayi is one of the very active celebrities who interacts with her female followers often regarding their problems in personal life due to the behaviour of men.

VIRAL VIDEO : Couple Got Arrested After They Were Seen Hugging Each Other On Moving Bike !!

Young couple who are in their early 20s, got arrested after a video of them hugging each other on moving bike went viral in...