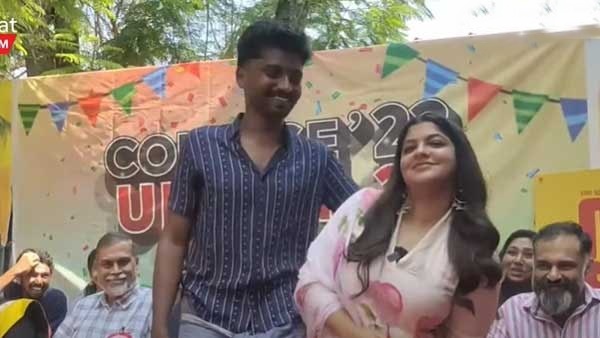 Female Celebrity Exposed The Toxic Comments That Surfaced For The College Student Incident!!

He who went on the stage, gave flowers to the actress and forced her to stand up before trying to put his arms around her shoulder to pose for a picture. Aparna who felt uncomfortable, immediately moved away from him, in a way of denying to pose for the picture. Video of the incident went viral in social media platforms with many condemning the student for his misbehaviour.

Later, on the stage, a officer bearer said “sorry” to the actress and the student concerned also arrived at the stage to ask apology. When he tried to shake hands with her, she pulled it away, according to reports. The incident created huge outrage among the users of social media platforms. Few even could be seen defending the student’s gesture.

A college student misbehaved with actress Aparna Balamurali during the promotion function of Thangam movie. @Vineeth_Sree I’m surprised about your silence 🙏 What the hell #Thankam film crew doing there.
@Aparnabala2 #AparnaBalamurali pic.twitter.com/icGvn4wVS8

The Ernakulam Law College Union has apologized to the national award winning actress for the way she was treated by the student. Through a social media post, the union said that they are deeply sorry for the incident which has hurt the actor. It said that they see the incident as a very grave issue and they also expressed their apology for what had happened.

Among the many who condemned the student, a number of celebrities including Manjima Mohan also came forward to call him out. In the meantime, singer Chinmayi uploaded a series of stories in her Instagram handle, exposing the men who dropped insensitive comment on seeing the video. 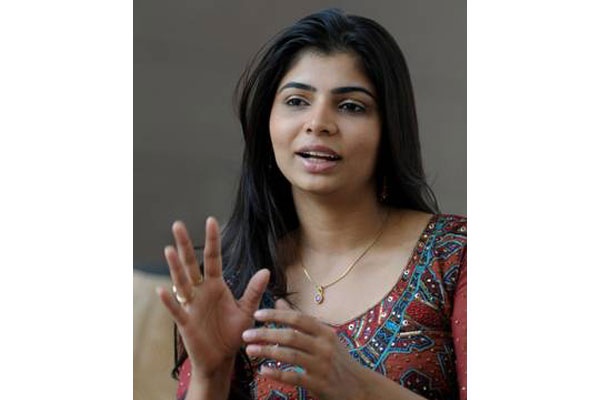 “THE CRAPPY CROWD IS ACTUALLY CHEERING HARASSMENT. I HEARD THIS IS A LAW
COLLEGE. SO UPCOMING LAWYERS ARE CHEERING HARASSMENT. THESE ARE THE
PEOPLE WHO MAY END UP IN COURTS TO SAFEGUARD WOMEN IN CHILDREN IN CASES
OF ASSAULT? THINK IT THROUGH” Chinmayi initially wrote, reacting to the incident. 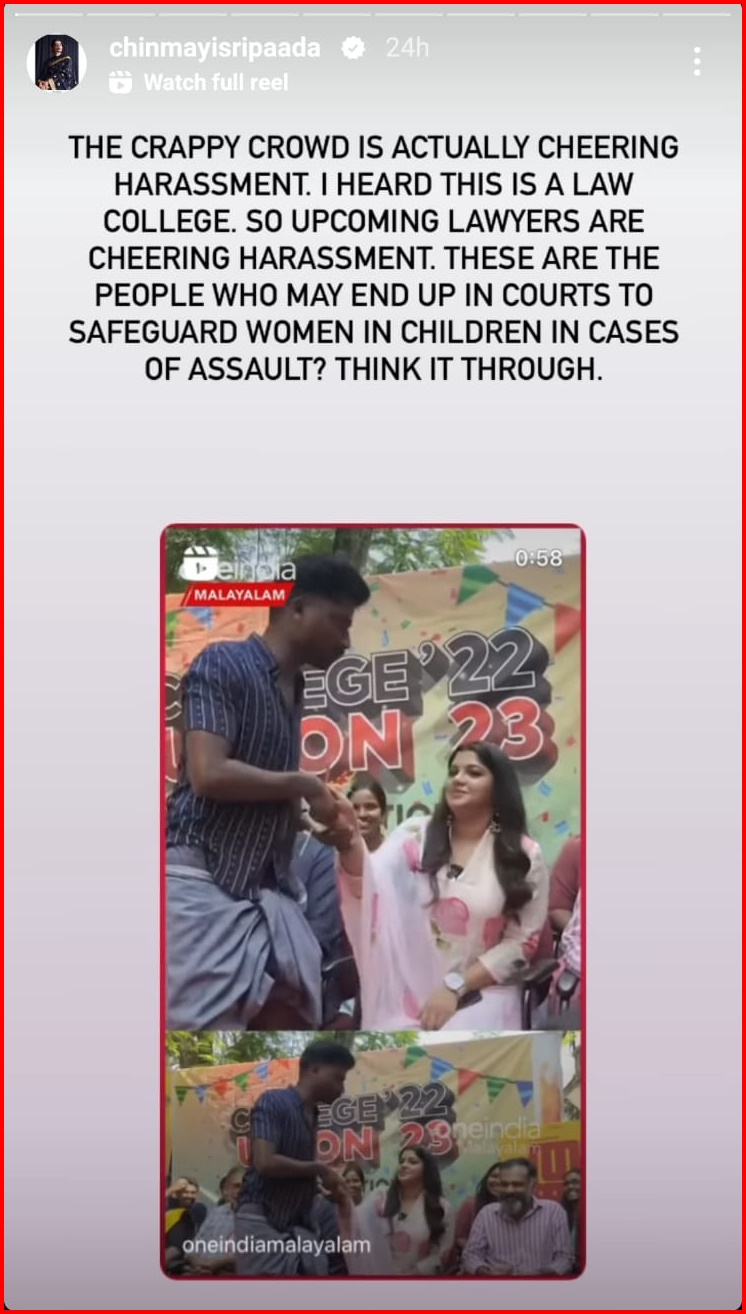 “ALSO THIS WAS POSTED IN A TAMIL FACEBOOK PAGE WHERE ALL THE MEN HAVE SUCH DISTURBING COMMENTS THAT IT IS SCARY. THESE MEN ARE GOING TO BE AROUND WOMEN WHO MAY TRUST THEM TO BE SAFE” She said in her another story by adding the comments of the toxic online users. 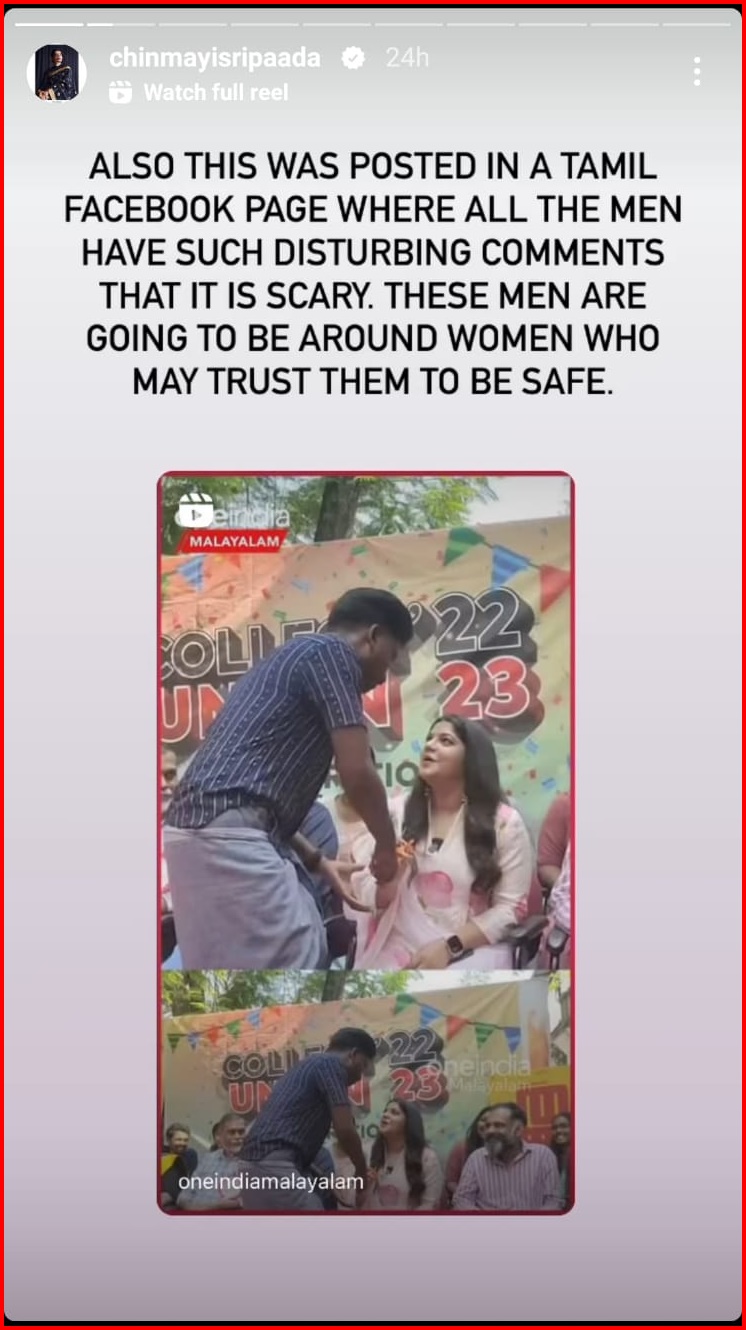 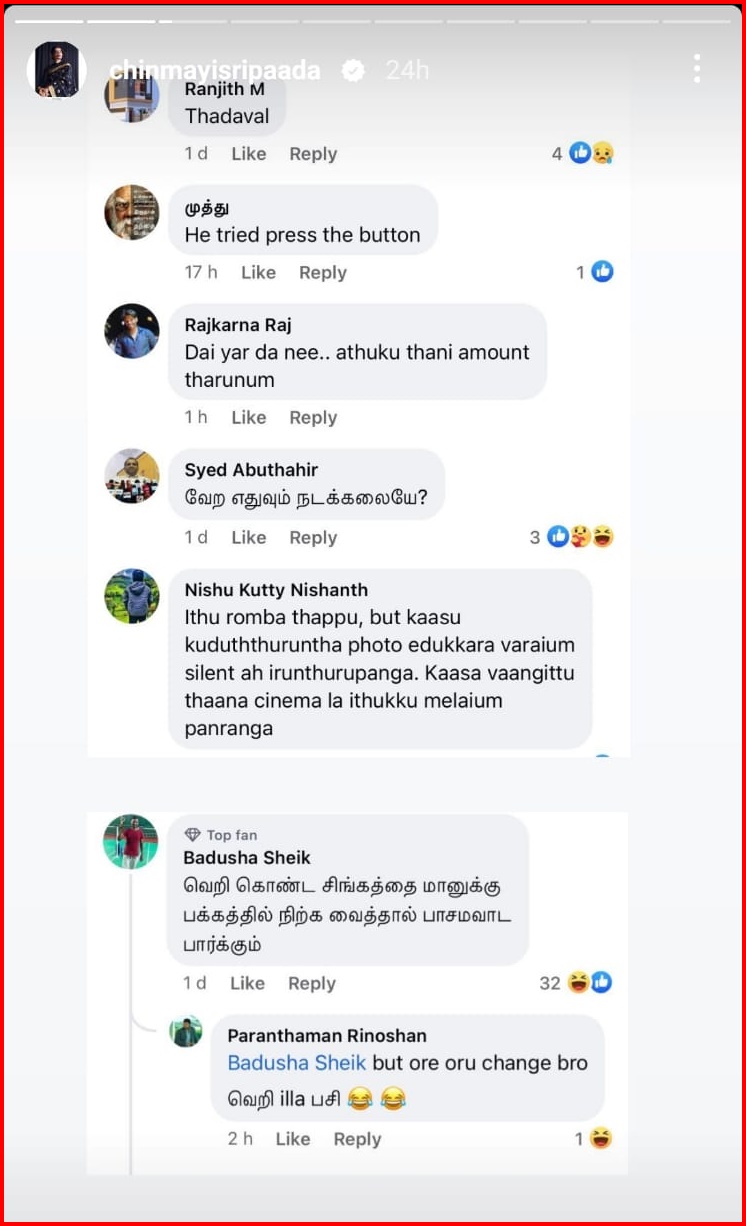 Highlighting a comment of a user who said “He just put his hand on her shoulder, you people leave those who commit sex crimes but suspend these students”, Chinmayi said “SO THE COMMENTS ON THIS POST. THERE IS ONE GUY WHO SAYS HE JUST PUT
A HAND ON HER SHOULDER. THESE ARE THE GUYS WHO SAY ‘KAIYYA PIDICHU
DHAANE IZHUTHAAN. RAPEA PANNAAN?” 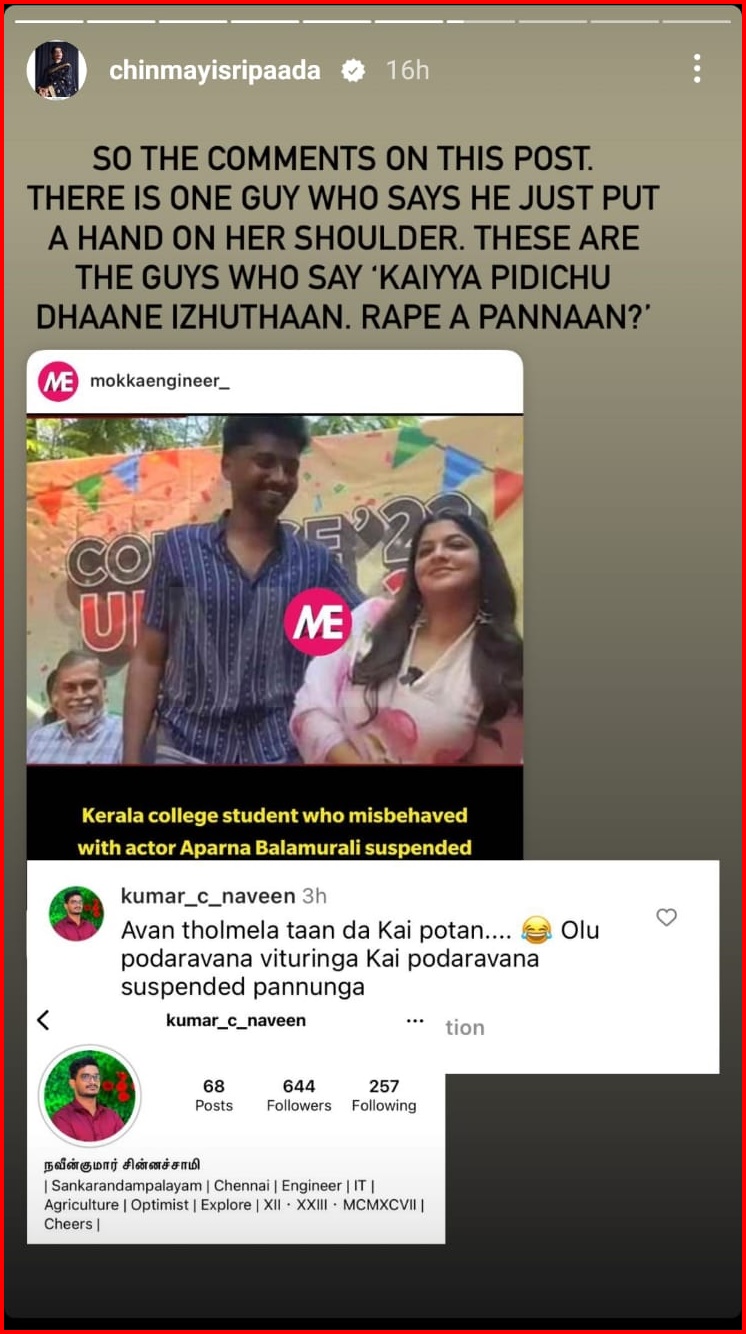 Cash Reward Announced By “Indu Makkal Katchi” For Anyone Who Kicks Vijay Sethupathi !!

A tweet uploaded by the official twitter handle of "Indu Makkal Katchi" about announcing cash prize for anyone who kicks Vijay Sethupathi created outrage...

Singer Malavika Exposed Pervert Who Sent Disgusting Texts To Her !!

Social media is definitely not a good place for cinema/television celebrities, especially for female celebrities as they are receiving trolls, abuses, obscene texts from...

The most expected movie of the year, BIGIL released yesterday and is receiving responses from across the world. The film has actor Vijay in...