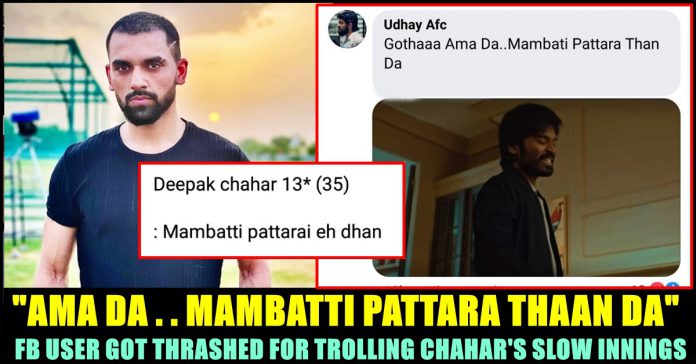 With the help of Deepak Chahar’s heroic innings, team India managed to win the second one day international match against Sri lanka after top order collapse. Team Sri lanka scored 275 runs in the first innings and while chasing the target, opening batsmen failed to give the start India needed. Manish Pandey and Surya Kumar Yadav played decently in the middle but it wasn’t enough to chase the target.

At one point, team India struggled by losing 7 wickets after scoring 193 runs and many thought that it was the end for the blue team. However, the calm and composed innings of Deepak Chahar made things possible for team India and the team clinched the series comfortably with 5 balls to spare in the innings. On seeing Deepak Chahar’s strike rate in the initial stage of his innings, a Face book user came up with a post trolling him by comparing him with former Indian captain Mahendra Singh Dhoni who captained him in IPL for Chennai Super Kings team.

Through the post, the user mentioned the runs scored by Deepak Chahar at that time and said that he belongs to the school of “Mambatti” (local term used to troll Dhoni’s unorthodox batting style). Chahar scored 13 runs from 35 deliveries when the post was uploaded and the user compared Deepak with Dhoni who would usually start his innings slowly during chases.

However, at the end of the match, Chahar proved himself by scoring the winnings runs and named as the Man of the match. The post uploaded by the Face book user blew up in no time as soon as the team registered its victory with the help of Deepak Chahar. Fans of Dhoni and Chennai Super kings flooded the comment section of the post which trolls, reactions and abuses.

“Yes, he belongs to “Mambatti” Pattarai” commented a face book user with the template of Dhanush from “Jagame Thandhiram” whereas many other supporters of Dhoni could be seen venting out their emotions in order to avenge the humiliation they suffered due to the post. Check out some of the reactions below :

Cricket experts and senior cricketers from all over the world are lauding the grit displayed by Deepak Chahar. Captain Kohli who was watching the match with rest of the Indian team in England uploaded a tweet appreciating Deepak Chahar and Surya kumar Yadav for their batting performances. “Will never forget this moment #teamindia #dream . Thank you so much for your wishes means a lot ☺️🙏 #keepsupporting” Deepak wrote in his Instagram after receiving accolades from all over the world.