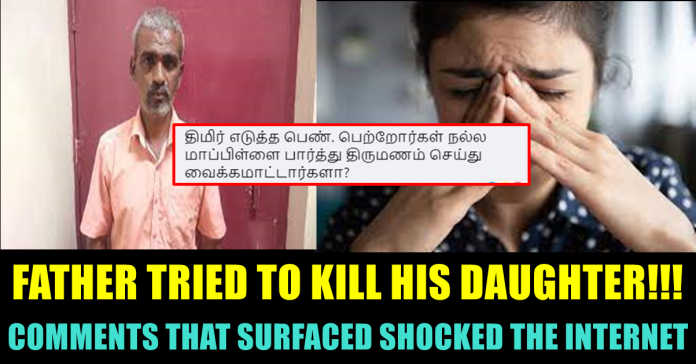 A news report that emerged on a drunken father trying to kill his daughter just because she chose love marriage over her father’s warning in Avinashi, Tamil Nadu, had created shock waves in the city.

Pooraja, the accused of this case is a painter who migrated from Tuticorin to Avinashi in Tirupur district 15 years ago and is currently residing in Madathupalayam Road, Munniapan Temple with his wife, two daughters, and one son. Pooraja’s elder daughter Priyanka is 19-years old. Mohammad Yasin, the 24-year old guy who was the son of Alaiudeen Basha, was residing in Sivashanmugam street with his family. Yasin and Priyanka were working in a nearby garment factory. The duo fell in love while working there and was in a relationship for the past 4 years.

Priyanka’s father, Pooraja warned her many times against her love affair with Yasin and he also sent her to her sister’s house, so that they both cannot meet each other. Even after all the rejections and warnings, the duo decided to marry each other. So, Priyanka escaped from her house and got married to Yasin on July 16th.

The couple started to live with Yasin’s family. The accused, Pooraja who was fully drunk, went to Yasin’s home on Saturday after knowing that everyone in their house has left to work. He was in such a wave of anger, that he vigorously started to attack his daughter with a paper cutter by trying to silt her throat and put her to death.

On hearing Priyanka’s voice, all the neighbors came to Yasin’s house but by the time Pooraja ran away and they redeemed Priyanka and admitted her to Avinashi Government Hospital for first aid followed by admitting her to a hospital in Coimbatore for further treatments.

Avinashi police caught Pooraja and are investigating the incident. In one of the statements, Pooraja said that he hates love marriage and he would have done the same if her daughter had married anyone in the same manner. This incident created a great shock among the neighborhoods of Avinashi.

The accused could be seen saying in the video, “Not this guy, I would have done the same thing to her if she had gone away with any other guy also”.

Netizens started to blaspheme Pooraja for such a filthy act towards his daughter. They are aroused in anger against Pooraja and are condemning him on social media.

Surprisingly there are some media users, who have commented supporting Pooraja’s act stating that what he did was correct and also saying that he must have killed her and left the place.

“He has done a great job. Let’s appreciate this man”,

“What is the purpose of that daughter to live who rejected to hear her father’s words?”

“Instead of dying in her husband’s house, it is better for her to die by her father’s hands”

“Only the father who had daughter knows the pain”

Checkout some of the comments below.

These kind of comments which surfaced supporting the inhumane act of the father, baffled public which is evident through the counter replies. It is hightime for such online users to realize that violence could not be a solution to any kind of problem and falling in love with a person irrespective of his caste, religion, race is not a problem at all. Comment your views on these reactions !!