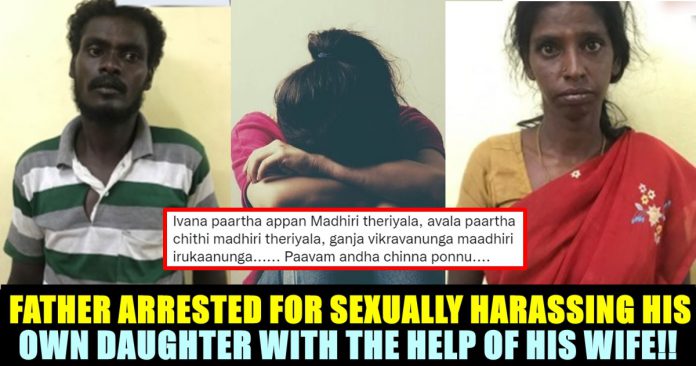 A 40-year old father is arrested along with his stepwife for sexually harassing 14-year old teenage daughter for the past year by intoxicating alcohol with cool drinks at Thuruporur in Chengalpattu.

Kumar is a 40-year old man from Thuruporur in Chengalpattu. His first wife died and they have a daughter of 14-year old. Kumar remarried Kasturi.

The minor girl was seen sitting worried at Marina beach in Chennai. The patrol police of Merina Police station interrogated her. She reported that her house is at Chengalpattu and she left the house due to some arrogance taken place there. She further reported that she will never get back to her home.

The patrol police admitted her to an orphanage at Tiruvottiyur. The officials of the orphanage had enquired the reason behind her elopement from her house. To which the girl responded that she had undergone some unsaid tortures from her father.

This incident was reported to the officials of the District Child Welfare Department. Few officials immediately came to the orphanage to enquire the girl. The crying girl then reported that her father, Kumar had given her cool drinks mixed with alcohol and harassed her sexually for the past year. Her stepmother Kasturi was also involved with her father’s crime.

With the statement of the 14-year old teenage girl, the official of the District Child Welfare Department filed a complaint against the girl’s father and stepmother at Tiruvottiyur All Women Police Station. The police further investigated the girl and collected all the details regarding the case.

With the growing crime against children, the POCSO Act 2012 (Protection of Children from Sexual Offences Act) came into force in November 2012. This act was formulated to deal with the offences related to children comprising sexual assault, sexual harassment and pornography. The act brought a big relief for the parents as it includes 46 provisions that expanded the scope of reporting offences against children which earlier were not covered under the Indian penal Code.

POCSO Act is a comprehensive Act that is enacted to safeguards the interests of children by incorporating child-friendly mechanisms for reporting, recording of evidence, investigation and speedy trial of offences through designated Special Courts. The Act encompasses the child whose age is below eighteen years of age. It defines various forms of sexual abuse like – penetrative assault, non-penetrative assault, sexual harassment and pornography.

Amidst this lockdown situation, several celebrities conducted chat session with their followers in social media to get themselves engaged. People are glued to Internet...

Actress Aathmika who is known for acting in films such as "Meesaya Murukku", "Kodiyil Oruvan" and others, a couple of days ago came up...

Sai Pallavi Opened On Why She Always Opting For Saree !!

Actress Sai pallavi who is currently busy promoting her upcoming film "Gargi", in an interview with VJ Parvathy, talked about the importance of condoms....