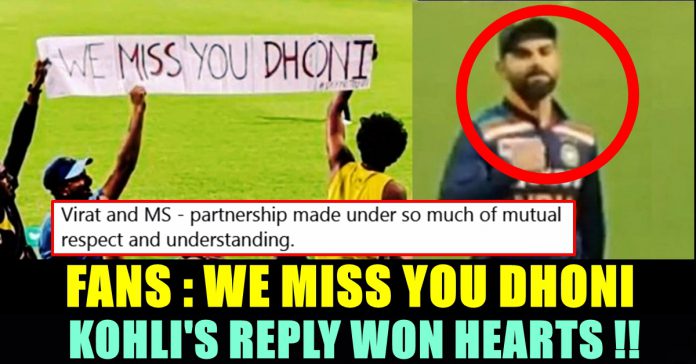 The amount of admiration Kohli has towards former Indian captain Mahendra Singh Dhoni is immense. Rather being a mere teammates, Dhoni and Kohli always shared a special bonding between them. Mahendra Singh Dhoni, to give enough space to Kohli to captain the national side in 2019 world cup, stepped down from captaincy two years prior. Unfortunately, the team lost in the semi finals.

Despite of the opinions from media and former cricketers about Dhoni’s retirement, Kohli always backed Dhoni during his final days in International cricket and stated that Dhoni will always be his captain. Both the cricketers are captaining different teams in Indian Premier League and the fans of both the teams are sheer rivals who often involves in verbal spat in social media platforms. But that doesn’t affect the relationship of the pillars of Indian cricket team.

Now, as Dhoni got retired from all forms of International cricket, fans of the cricketer are missing him so badly. They are expressing their emotions through social media platforms. Few fans went one step ahead and showed a placard saying “We miss you Dhoni” in the second t20 match that took place between India and Australia.

Virat Kohli who is currently captaining the Indian team, while fielding, saw the message provided by the fans and made a gesture saying “Me Too”. Video of his gesture is doing rounds in the social media platforms with reactions pouring love towards the duo.

“Virat and MS – partnership made under so much of mutual respect and understanding.” wrote a fan on seeing this gesture from Kohli whereas many others shared the videos of the duo together.

Virat Kohli reacting 'I miss him too' on 'We miss you MS Dhoni' banner.

Virat and MS – partnership made under so much of mutual respect and understanding. pic.twitter.com/Y9Z0pkYsml

Even your idols idolize him.

#Mahirat
When fans showed the banner of MISS YOU DHONI, kohli signalled them with ME TOO!
Missing the mahirat duo on field! pic.twitter.com/rxbKQ0jZ7B

In the same match, two more incidents took place referring the legendary cricketer who is currently captaining the Chennai Super Kings team. After failing to et Dhawan out by stumping, Australian wicket keeper Wade said “Not Dhoni, Not quick enough like Dhoni” to Dhawan and received a “Yes” from the Indian opener.

Australian head coach Justin Langer, during the post match presentation said that Hardik Pandya played like MS Dhoni to finish the match. These incidents evidently proves that the impact created by Dhoni is immensely big and couldn’t be replaced.

Previous articleKamal Replied To Those Who Trolled Him As “Sanghi” !!
Next articleJournalist Got Upset On Seeing This Recent Youtube Sketch Video Of “Parithabangal” !!