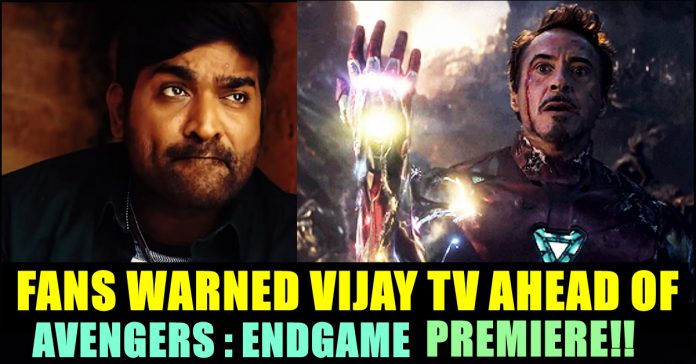 For the first time in Tamil television history, Avengers : Endgame of Marvel Studios is going to get telecasted in Vijay Television on Sunday at 12 :30 noon. Promotional videos of the same are getting published in the channel. Avengers: Endgame is a 2019 American superhero film based on the Marvel Comics superhero team the Avengers, produced by Marvel Studios and distributed by Walt Disney Studios Motion Pictures. It is the sequel to 2012’s The Avengers, 2015’s Avengers: Age of Ultron and 2018’s Avengers: Infinity War, and the 22nd film in the Marvel Cinematic Universe.

Despite of being a hollywood film, the film Marvel series has a separate fanbase in tamilnadu. Fans celebrated the film during its release time as they would celebrate a Tamil hero’s movie. However, one fact about the Tamil version of the film disappointed them in big time. Marvel India has officially got Vijay Sethupathi and Andrea Jeremiah on board to dub for Iron Man and Black Widow respectively.

As we all know many of the fans of Avengers seemed to be dejected due to the change in Tamil dubbed version. The main reason behind it is nothing but the voice of the Tamil celebrities who lended their voices to the main characters of the End game. Many fans who are emotionally connected with the characters of Avengers used to witness them with different voices. This abrupt change in the voice artists disappointed them in a big time which resulted in online trolls against Vijay sethupathi who dubbed for the main protagonist.

Now, as soon as Vijay Tv announced that it is going to telecast the film for the first time in Tamil, enormous number of fans demanded for a new dubbed version in which Ravi Shankar who dubbed for iron man in all these years lent his voice. Some fans even warned Vijay TV that their TRP will not reach up to their expectation level if they telecasted it with Vijay Sethupathi’s voice for Iron man.

While reacting to such comments which emerged during the film’s release time, Vijay Sethupathi said ““According to me, the experience I gained while dubbing for that film is important more than the critics I received. If one stop doing this due to fear, then the lose is for that person. Once people did it with their friends and neighbours, now they are doing it in social media. Those kind of people will be there in every phase of our life. It is me who knows about the relation between my work and me. there is no chance for them to know about it. If I have to stop it when they criticize then I wouldn’t be an actor today” said the actor in his Interview with a popular youtube channel.

Comment your views on these reactions from the fans of Avengers !!