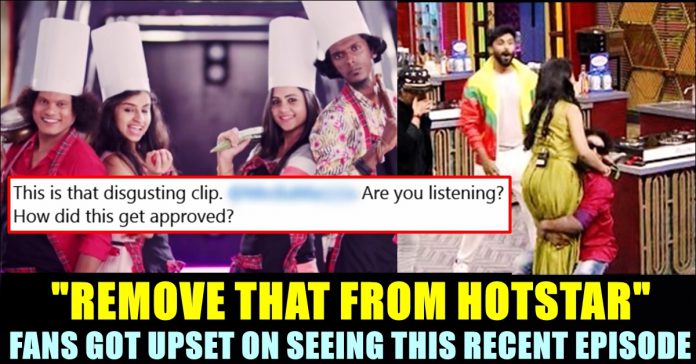 The most loved “Cooku with Comali” show came under scanner after a number of twitter users expressed their disappointment over a particular part which took place in the hotstar cut of one of the recent episodes contained homophobic slur. The makers who removed the particular part while telecasting it in Television, is expected to remove it soon from the online streaming space.

Though the show is being received by the mainstream audience in a positive way, few aspects of it didn’t go well with a set of people who are pointing their finger at the humours being made in the show based on body, gender. Now, a particular part from one of the recent episodes grabbed the attention of the Twitter users as it contained homophobic slur.

The video which is doing rounds in social media platforms shows Pugazh sitting in a “confusion” room which is a parody of Bigg Boss show’s “confession” room. The aspiring comedy actor could be seen interacting with a voice that imitates the voice of Bigg Boss. At one point, when the voice says that Pugazh is looking so cute that even men will fall in love with him, a voice of Vadivelu saying “Avana nee” was added in order make people laugh.

On seeing people who belong to LGBT community getting humiliated in this way in a show that is being watched by public, many twitter users came up with reactions condemning the creators of “Cooku with Comali”. A twitter user came up with a tweet saying that the team of CWC were involved in doing sexist, body shaming and gender based humours in the show and now also made a homophobic slur by adding the audio.

Many others who got emotionally hurt came up with tweets and reactions condemning the usage of the Vadivelu dialogue from the 2004 film “Gambeeram” :

This is that disgusting clip. @MediaMasons Are you listening? How did this get approved? https://t.co/zYH4mNAPzE

They are using it realising it has thus homophobic origin. The CWC team has made sure it is used in the script. It was not even in the non scripted area. 😏 Cook with Comali has a huge problem and now the entire team has used this slur against a comment they made in script..! https://t.co/Sjptj3xaTk

Seriously. I am tired. Its 2021 and we still hear jokes like “Avana nee…” There is bodyshaming, insult comedy and now homophobic background comments. This is not done. This is not cool. The makers of the show #CookWithComali2 edit/remove it. @MediaMasons @vijaytelevision

The makers have removed the part while telecasting the episode in Television but it is still being featured in the hotstar version and the internet users are expecting the channel management or CWC team to remove it soon to stop normalising LGBT people getting humiliated in a most effortless way.