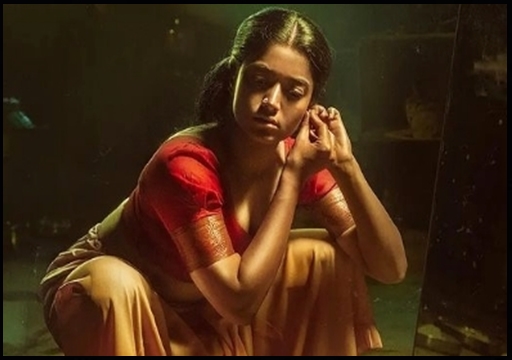 Pushpa : The Rise, directed by Sukumar, released in the theatres across the country on 17th of December and has been running successfully world wide ever since. The Allu Arjun starrer has been particularly received well in the Hindi belt, despite competition from Ranveer’s 83 and the raging numbers of COVID 19 positive cases.

The film is also streaming on Amazon Prime video in four languages – Tamil, Telugu, Malayalam and Kannada. Hindi version of Pushpa is also going to be available in OTT soon, says reports. Meanwhile, a number of fans who caught the film in their home, pointed out a blunder made by the makers of “Pushpa”, the film.

In the end credits of the film, instead of crediting the female lead as “Rashmika Mandanna”, they spelt her name as “Rashmika Madona”. Though the actress seem to have no problem with it as there are no condemnation tweets or posts surfaced from her even after fans trying to notify her about it through twitter and other social media platforms, a number of fans are trolling the makers for committing such blunder in a film, plot of which revolves around the surname of the protagonist.

“200 crores budget, 2 years of production(also 2 intervals in one film) and no one cared to check the name of the main female lead?” a social media user asked whereas another user criticized the characterization of Rashmika and said “The importance given to Rashmika or her character in Pushpa gets reflected in the end-credits. Rasmika Madona va? Seriously? That’s so embarrassing”

wut😂 200 crores budget, 2 years of production(also 2 intervals in one film🤧) and no one cared to check the name of the main female lead?

The importance given to Rashmika or her character in Pushpa gets reflected in the end-credits. Rasmika Madona va? Seriously? That’s so embarrassing.

I really loved watching @PushpaMovie
Until I saw ‘Rasmika Madona’ at the end.

People have GOT to get the name ‘Rashmika Mandanna’ right.. At least when the theme of the movie revolves around the idea of surname.. 😬🤦‍♀️@alluarjun @iamRashmika @aryasukku #taggedele pic.twitter.com/YJY31RINGc

Rashmika Mandanna has been misspelled as Rasmika Madona in the end credits of #Pushpa, on Prime.
Says a lot about on women in Telugu movies, heh.

@iamRashmika @PrimeVideoIN I thought her name was “Rashmika Mandanna”, when did it change to “Rasmika Madona”?. pic.twitter.com/OIZmxyQPvb

On the work front, Rashmika who rose to fame through pairing up with Vijay Devarakonda in “Geetha Govindham”,  is all set to appear in films such as  “Aadavallu Meeku Johaarlu”, “Mission Majnu” and “Goodbye”. Comment your views on this blunder made by the makers of Pushpa !!

Previous articleSivakarthikeyan Reacted To This Old Video Of Himself Trolling Director Shankar !!
Next articleJUST IN : Saina Nehwal Reacted To The Apology Of Actor Siddharth !!

Talking about 96 movie crew using old hit songs of him, Ilayaraja in an interview said that what the movie crew done is completely...