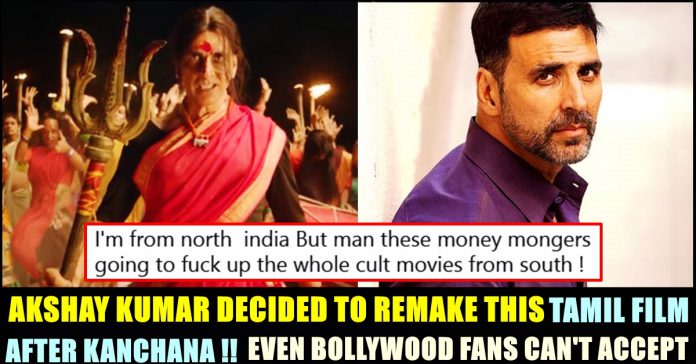 As soon as the reports on Bollywood Superstar Akshay Kumar remaking Tamil blockbuster “Ratchasan” surfaced in Internet, fans started trolling the 2.0 actor and Bollywood film industry for relying on remakes instead of making original films. Akshay recently remade “Kanchana” of Raghava Lawrence and it became a flop among the Bollywood audience. Film such as Vikram Vedha, Maanagaram, Kaithi are being remade in Bollywood film industry as well.

Ratsasan is a 2018 Indian Tamil-language psychological thriller film directed by first-time director Ram Kumar. The film features Vishnu Vishal and Amala Paul in the lead roles, while Saravanan, Kaali Venkat, and Ramdoss, among others, play supporting roles. The film’s plot revolves around a youngster who gives up on his dream of becoming a filmmaker and takes up the job of a police officer after his father’s death. He then attempts to track down a psychotic killer who targets schoolgirls.

Now, a recent report emerged saying that Bollywood Superstar Akshay kumar is going to play lead in the Hindi remake of “Ratchasan”. It is notable that the Hindi dubbed version of the film is streaming in youtube platform for free with 25 million plus views. On seeing the latest update on the film’s proper Hindi remake, fans started trolling the Bollywood film industry for various reasons.

Many felt that film like “Ratchasan” should be left untouched as the remake versions would ruin the essence of the original one. “Simply Bollywood has no other choice other than following Kollywood” a social media user said through his comment whereas another one said “I’m from north india But man these money mongers going to fuck up the whole cult movies from south ! Ratsasan is one the best movies comes out from tamil cinema and raised the bar for psycho thriller. Such a shame that producers also sell the rights”

I'm from north india But man these money mongers going to fuck up the whole cult movies from south ! Ratsasan is one the best movies comes out from tamil cinema and raised the bar for sycho thriller 😔 Such a shame tht producers also sell the rights

Simply Bollywood has no other choice other than following Kollywood pic.twitter.com/2cFGWYPqdE

Ayushman would have been a better option

It's another furniture to be broken next. Seriously AK can well break it well. We have already got Laxmi bomb and now this 🙃

Don't remake this masterpiece movie..
Movie like this deserves to be in original version only..
The remake will ruin the original.

Ratsasan is a good movie please don't ruin it's originality,let the Tamil makers get their recognition.

“I Can’t Sleep The Whole Night” – Woman After Arranged Marriage

A Facebook post of an alleged 27 year old female about the trauma she went through on the night of her marriage which was...

Mumbai Indians is one of the most famous teams in the Indian Premier League. The team has had a great fan-following ever since the...