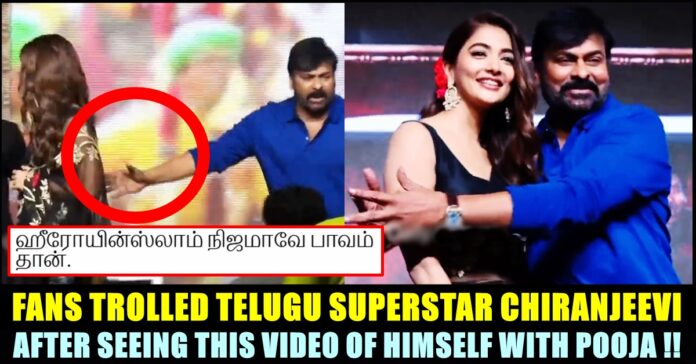 A couple of days ago, actress Pooja Hegde who paired up with Ram Charan Teja in the recently released Telugu film “Acharya”, shared a video of Telugu Superstar Chiranjeevi involving in mischievous acts while posing with her and added a caption saying that the Telugu actor is “sweetest” and “ever jovial”. However, the video didn’t go well with the fans as it became a subject to severe troll due to the gestures of Chiranjeevi.

“Acharya” directed by Koratala Siva, starred the most celebrated father and son duo of Telugu cinema Ram Charan and Chiranjeevi together. Pooja Hegde was casted as a lead lady and in one of the promotional event of the film, Chiranjeevi posed for a series of pictures with the actress.

In the viral video, Chiranjeevi, jokingly avoided Ram Charan and posed alone with Pooja for a brief moment. Sharing the video through her Twitter handle, Pooja wrote “😂 Sweetest and ever Jovial @KChiruTweets Garu 🤗🤗🤗 #Aacharya” as her caption.

However, fans found the gestures of Chiranjeevi inappropriate which is evident through their comments in social media platforms. A fan edited a video subtitling the whole incident explaining how the actress tries to avoid sitting in between Ram Charan and Chiranjeevi and about how she desperately wants to leave the stage while Chiranjeevi was posing with her for the pictures to the media.

Check out some of the reactions that surfaced regarding the series of events below :

Balaji Murugadoss, one of the happening contestants of the ongoing Bigg Boss show, is having issues not only with his co-contestants but also with...

"Veera Simha Reddy" of Nandamuri Balakrishna got released on 12th of January with much expectations. The film is running successfully in theatres across the...