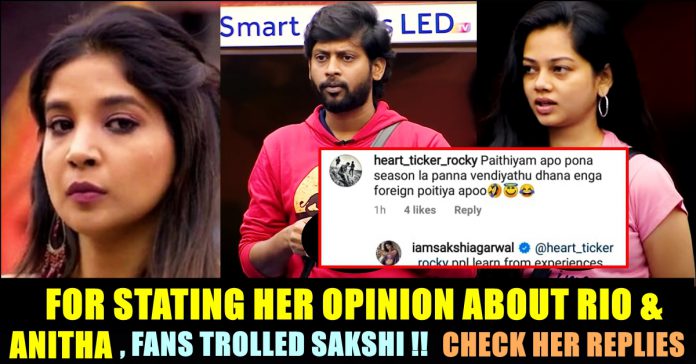 Former Bigg Boss contestant Sakshi Agarwal uploaded a video in her official Instagram account asking people to vote for their favourite contestant in the ongoing Bigg Boss show. She gave a brief narration about the recent episode of the show and suggested people to vote. However, users of Instagram started trolling the actress in the comment section based on her participation in the previous season of the same show. In reply, Sakshi gave them back in her own way, screenshots of which are doing rounds in the social media platforms.

She started her video by addressing the open nomination that took place in the first day of this week. “One have to state the reasons in front of the contestants. That too a huge task” she said in her video. She further asked why Rio talked about Anitha whom he didn’t nominate during the nomination process.

“Rio talked about Anitha but didn’t nominate her. Instead of talking with her personally to resolve the issue, the way he talked about Anitha during the nomination process led to a big fight.” Sakshi said. “Open nomination is actually a good thing. They will get a chance to realize their mistake. If they correct it and act accordingly, there are chances for them to reach finals. You can also make them reach the finals by voting for them. Vote for them now in Disney plus hotstar” she added.

Many users of Instagram started trolling Sakshi after seeing this video. An user asked why she failed to win the season. “Thats my biggest victory” replied Sakshi.

Another user asked a similar question and Sakshi, to him, answered by writing “its all learning na dear☺️ i learnt so much and i think that’s my growth”

Check out some of the reactions and replies :

Sakshi Agarwal debuted to Tamil film industry through a minor role in Atlee’s Raja Rani. She went on to act in films like “Kaala”, “Viswasam” in supporting roles. She participated in the third season of Bigg Boss show and got eliminated from it on the 49th day after receiving less number of votes. Her upcoming films include Cinderella and Ezhil’s Aayiram Jenmangal.

Director Cheran became a subject to trolls and memes after responding to a birthday wish made by the official social media handle of SUN...

Public transport buses across India often face the wrath of an angry mob. Almost every riot or violent demonstration results in a video or...