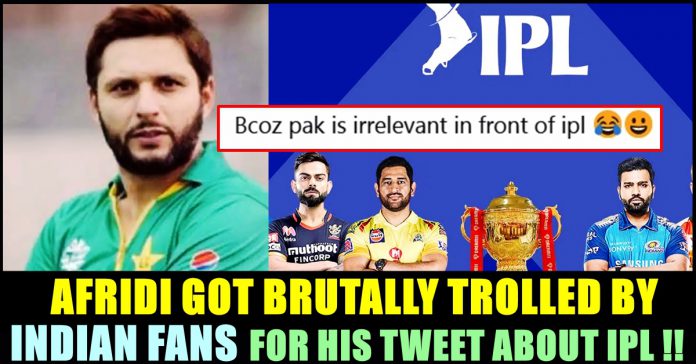 The most awaited 14th edition of IPL season is going to get inaugurated from Today. Predictions from the experts, analysts, former players regarding the winners of the upcoming season are surfacing from across the social media platforms. Teams are getting ready and players from across the world have reached the country to play the tournament which is going to last for two long months.

Meanwhile former Pakistan cricketer Shahid Afridi came up with a tweet criticizing the international cricketers for choosing IPL over international matches and cricket boards of other countries for allowing its players to play the cash rich tournament.

“Surprising to see South Africa allowing players to travel for IPL in the middle of a series. It is sad to see T20 leagues influencing international cricket. Some rethinking needs to be done!!” read the tweet of the former all rounder.

Surprising to see @OfficialCSA allowing players to travel for IPL in the middle of a series. It is sad to see T20 leagues influencing international cricket. Some rethinking needs to be done!! https://t.co/5McUzFuo8R

Enormous number of Pakistan cricket fans backed the tweet of their idol. However, the comments of Indian fans garnered the wide attention. “Its way better than playing Pakistan. At least they don’t get bread and omelette in the IPL. Any IPL team can defeat Pakistan any given day. Moreover t20 WC is in India. So it is more of a common sense as to why everybody wants to play IPL.” said a follower whereas another one said “Bcoz pak is irrelevant in front of ipl “

Its way better than playing Pakistan. At least they don't get bread and omlett in the IPL😂😂😂.Any IPL team can defeat Pakistan any given day. Moreover t20 WC is in India. So it is more of a commen sense as to why everybody wants to play IPL.

Bcoz pak is irrelevant in front of ipl 😂😀

This is not any Random T20 league, it's IPL which has a window reserved in ICC Future Tour Programme. It's THE IPL.

Not only CSA but also BCB, NZC, ECB will allow their players to play IPL over test cricket.

Now understand the level of pak national team as compare to IPL !!

Tbh nobody actually care about series with Pakistan when IPL is close. Had it been aus,eng and NZ all key players of RSA would have stayed one more day. But since it's pakistan they thought it's better to leave for India and get some practice for upcoming competitive cricket.

Its not just any other league, and anyone will allow if the opposition is Pakistan.

Because There Is Some Great Craze, On INDIAN PREMIER LEAGUE, Not Like Ur Country's minnow psl🤣🤣🤣LOL, 3rd Class Pakistan Cricket Team, Playing Against Weak South African Squad And Winning The Series🤣🤣🤣LOL

Previous articleFan Wanted Mirchi Suchi To Take Part In “Cooku With Comali 3” !! Check Her Reply
Next articleImran Khan Blamed Women’s Dress For The Rise In Rape Cases !! Ashwin Schooled Him

Naveen Muralithar is popularly known for his participation in Vijay Televison program Kalaka povathu Yaaru. Being one of the leading mimicry artist in town...

While VJ Anjana was busy brushing off the baseless rumour that caused by Polimer news channel, a fan named Allu Arjun aka "Forever Rocky"...