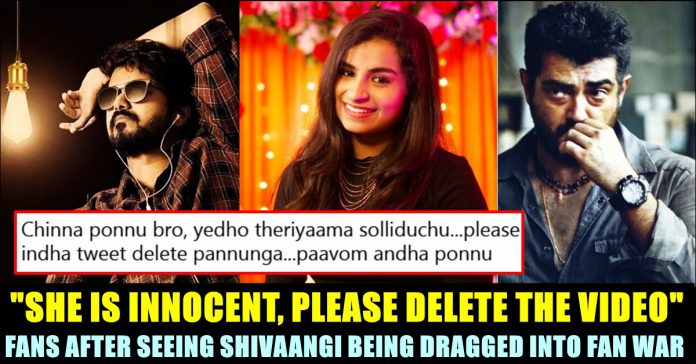 A clip from an interview of “Cooku with Comali” fame Ashwin, Shivangi, Shakthi talking about actors Vijay and Ajith was uploaded by a fan page of actor Vijay to troll his on screen rival Ajith. However, many wanted the video to be taken down as they thought Shivangi doesn’t demean actor Ajith kumar in any way. Shivangi who rose to fame through Super Singer show, gained a separate fan base after participating in the “Cooku with Comali” show. In the video, she couldn’t tell the name of the last film Ajith acted when Ashwin challenged her to say it.

Ajith kumar who is considered as a rival of actor Vijay since mid 2000s, has a strong friendship with the “Gilli” actor since early 90s. They both acted together in a movie named as “Rajavin Parvayile” and their friendship became evident in certain occasions. Recently, in “Master” audio launch, Vijay said that he got inspired from his friend Ajith and wore suit for the first time for an event purpose. However, the rivalry between both the actors is less as far as the rivalry between their online fans is considered.

We could see hashtags being trended by the fans of both actors against each other often in the micro blogging social media site. They could also be seen involved in ugly verbal spats. Now, a twitter page named Troll Cinema uploaded a video of Ashwin, Shivaangi and Shakthi talking about the last films acted by Vijay and Ajith. When she was asked to tell the last film acted by Vijay, Shivaangi immediately said that it is “Master”.

When Ashwin and Shakthi asked her to tell the last film acted by Ajith, Shivaangi said that it is “Vivegam”. After that she said that it is “Vedhalam” and also tried to tell “Valimai” is Ajith’s last time. She who couldn’t tell the correct answer, asked the makers of the show to chop the portion and said that she wants to act with both Ajith and Vijay in future, in a humorous way.

Many of those who saw the video, wanted the fan page to delete the video as Shivangi had no intention to disrespect Ajith Kumar. “can you please delete this, you guys unnecessarily creating an issue, she said she like Ajith as well.. she forget the movie name, it doesn’t mean she doesn’t like Ajith..” a follower said whereas another one wrote “Deiii you are abusing a young girl without watching what she fully said ! STOP ABUSING WATCH FULL VIDEO FIRST! SHE EVEN SAID DON’T MISTAKE ME “THALA FANS” in twitter.

Yeah
She just forgot the last movie name. There is no unwanted things in this video.
Why are you asking to delete?

Deiii you are abusing a young girl without watching what she fully said ! STOP ABUSING WATCH FULL VIDOE FIRST!

SHE EVEN SAID DON’T MISTAKE ME “THALA FANS”

Kindly delete tweet this may affect a young girl pls

Previous article“I’m Going To File A Complaint Against Him” – Chinmayi After Facing Mental Harassment In Club House
Next articleRavi Ashwin’s Savage Reply To A Fan Who Said That He Won’t Play WTC Finals !!