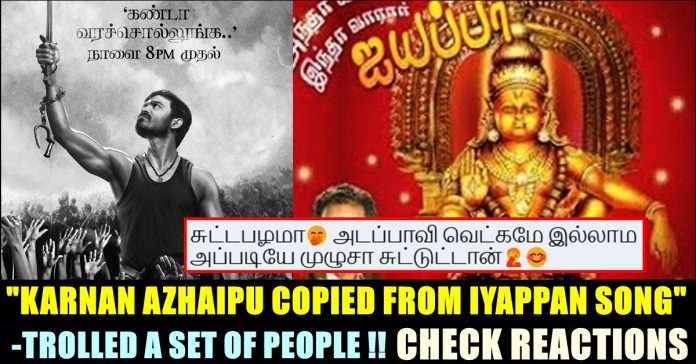 Makers of Dhanush’s upcoming film “Karnan” released the first single of the film in youtube. The lyrical video of the song which starts like “Kandaa Vara Sollunga” is trending at number one in the video streaming platform. The song was composed by Santhosh Narayanan with Kidakkuzhi Muniyammal singing the song. The song garnered 3 million views in youtube so far and became a chartbuster with many celebrities and fans lauding the intensity of it.

Manwhile, a number of social media users compared the song with a devotional song of Thekkampatti Sundar Rajan and made memes, trolls to make fun of it. However, it has been revealed that the makers of “Karnan” had given credits to the singer and Ramji audios, Madurai in the song’s description.

The song’s lyrics which were written by Mari Selvaraj, talks about the abilities of the protagonist in battle field and about his many other qualities including kindness, generosity etc. The song’s intensity increases with every visual of the lyric video which shows a man drawing the face of the protagonist by just using a torch. Along with Kidakkuzhi Muniyammal, Santhosh Narayanan also sung the song. He could be seen leading a band of folk musicians and the musical instruments were used as properties as well. Director Maari Selvaraj also makes his presence in the lyric video.

Along with fans, many celebrities from the film industry lauded the song for the way it is made. “This song is something else ! Out of the park bro
@Music_Santhosh Loved it till the very end.” wrote actor Harish kalyan after watching the song whereas director Karthik naren said “Just WOW… Can’t wait for the theatrical experience”

This song is something else ! Out of the park bro @Music_Santhosh Loved it till the very end. @dhanushkraja 👌🤗 https://t.co/fiHiWd7xBX

Some of them made memes and trolls to make fun of the single as well. Check out some of such reactions below :

However, it is being highlighted in the social media platforms by many users that the makers of “Karnan Azahaipu” gave credits to Thekkampatti Sudarrajan and also added credits to them in the song’s description.

“Pariyerum Perumal” fame Maari Selvaraj’s next venture “Karnan” starring Dhanush is nearing its theatrical release as the makers have recently announced that the film is going to be released on 9th of April.. Kalaipuli S Dhanu who is producing the film said that Dhanush have completed dubbing for his film through his official twitter account and the fans of Tamil cinema are eagerly waiting to witness the rural drama. Meanwhile, reports emerged revealing the plot of the film which promised a revolutionary period drama through its posters and working stills.

On Wednesday, Tamilnadu's BJP leader Annamalai came up with a series of tweets criticizing the state's finance minister Palanivel Thiaga Rajan who belongs to...