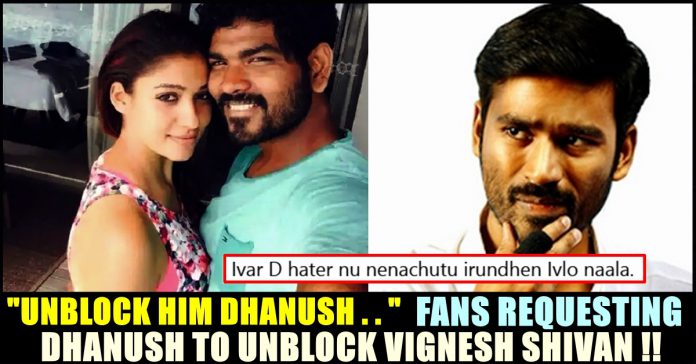 On the 38th birthday of National award winning Tamil actor Dhanush, entire Kollywood industry came up with wishes through tweets, videos and posts. First look of one of his upcoming film which was tentatively titled as “D 43” was released as a part of the celebration as well. Filmmaker Vignesh shivan who shared screen space with the actor in “Vela Illatha Pattathasri” film and directed a film named “Naanum Rowdy Thaan” under his production banner wished him on his birthday through a tweet. On seeing his tweet, a number of fans tagged Dhanush and requested him to unblock Wikki who is wishing Dhanush on his every birthday.

Vignesh Shivan debuted to Tamil film industry through Simbu’s “Podaa Podee”. The film’s production started in 2008 and managed to get a theatrical release only during 2012. The filmmaker got the opportunity to direct the film after making a short film by having music director Dharan to compose for it.

After directing Podaa Podi which is a box office dud, it took 3 years for Vignesh Shivan to release his next film “Naanum Rowdy Dhaan” which kick started his filmmaking career. The film was produced by actor Dhanush and had Vijay Sethupathi and Nayanthara in the lead roles. It is very well know that the filmmaker developed a romantic relationship with Nayanthara during the making of this film.

Prior “Naanum Rowdy Thaan, Dhanush made Vignesh to act in his film “Vela Illaa Pattathari” as one of the engineering graduates. Now, in his birthday tweet, Vignesh Shivan who mentioned Dhanush as his “Mentor”, added a hashtag in front of the name “Dhanush” instead of tagging the official. twitter handle of the actor. “Happy birthday to my dearest mentor #Dhanush sir. May ur talent ,dedication ,skill , hardwork take u to places u deserve! Already u r proudly flying high & even Sky ain’t the limit for ur acting prowess! StayBlessed #Midas with good health, peace & everlasting success” read the tweet of the filmmaker.

May ur talent ,dedication ,skill , hardwork take u to places u deserve! Already u r proudly flying high & even Sky ain’t the limit for ur acting prowess!

With many fans of actor Dhanush “thanking” the filmmaker for wishing their idol, few asked update to Vignesh about his upcoming film “Kaathu Vaakula Rendu kaadhal” as well. On seeing the filmmaker not tagging Dhanush in his tweet, a number of twitter users tagged Dhanush and requested him to unblock Wikki.

“He is wishing every year without fail, remove the bloc Dhanush” a fan commented whereas another one wrote “I was thinking he is a hater of D”.

It is notable that Nayanthara, while receiving an award for acting in “Naanum Rowdy Thaan”, made a statement saying that Dhanush who produced the film hated the performance of the actress in the romcom. “I have to say sorry also to Dhanush. Because Dhanush absolutely hated my performance in “Naanum Rowdy Thaan”. So sorry Dhanush for disappointing you with my performance. I will probably make it better next time” Nayanthara said in the award function to which Dhanush could be seen laughing and clapping hands.

Previous articleChinmayi Exposed An MNC Company Employee Who Sent Abusive Texts To Her !!
Next articleSiddharth’s Comment On Vairamuthu Creates Debate In Social Media !!

Team India is struggling and looking for all the ways to draw this ongoing test match by just having four wickets in the hands....