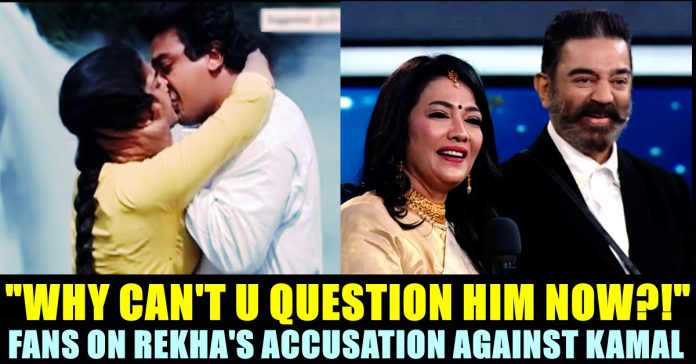 On seeing the contestants list, fans started reacting in various ways. Army pages for the female contestants have started emerging in social media pages. Many of the celebrities were either personally or officially related to Kamal Haasan. Actor Aari said that Kamal inaugurated his trust whereas model balaji Murugadoss said that he met Kamal Haasan personally in his office after achieving in body building. Actress Gabriella said that she acted as a younger sister of Sruthi Haasan, daughter of Kamal Haasan.

Meanwhile actress Rekha who acted with Kamal Haasan in “Punnagai Mannan” also took part in the show. She made her entrance with all smiles and received the warm welcome of Kamal Haasan. When Kamal said that he got surprised with her participation, she explained Kamal why she entered the show.

These gestures of the actress raised one question among the netizens. Months back, Rekha made an allegation against Kamal Haasan and director K. Balachander for shooting a lip lock scene without her consent.

As we all know, Kamal Haasan is a man of perfection and the film “Punnagai Mannan” was directed by his master K. Balachander. In the film Kamal played the role of “Sethu” and Rekha played “Ranjani”.

While talking about the experience, Rekha said “I was so small at that time as I just finished my 10th standard at that time. I don’t know a thing about Cinema at all at that time. During the making of that scene at the falls, Balachander sir asked me to close my eyes as I was about to die, according to the scene” Rekha started explaining about the incident.

Now, Netizens are reacting on the contradiction. “Didn’t Rekha only recently reveal that she was coerced into doing an intimate scene for Punnagai Mannan? Would she be okay being put in the vicinity of the guy who participated in her harassment?” one of a twitter user questioned.

Check out some of the similar reactions below :

Didn’t Rekha only recently reveal that she was coerced into doing an intimate scene for Punnagai Mannan? Would she be okay being put in the vicinity of the guy who participated in her harassment? 🤔

Rekha is the next contestant. Punnagai Mannan Pair is on stage 😻

she had recently created a contriversy tha kamal kissed her in punnagai mannan without telling her. will she discuss that in stage?? #BiggBossTamil4

Comment your views on these questions raised by the Netizens now !!

Atlee is arguably one of the most loved and hated filmmaker of Tamil cinema right now. Being a former assistant of Shankar, Atlee’s way...

“I Love Your Husband”- Woman Sacrificed Her Husband For A Young Girl !! WATCH

Even in the triangular love movies that were released 40 years ago, we wouldn't have seen stories such as a woman sacrificing her husband...