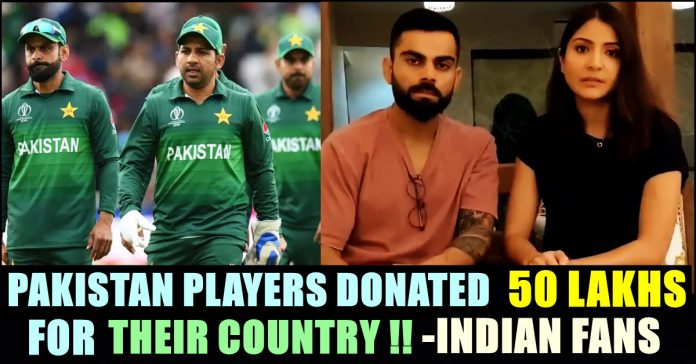 As soon as Pakistan and Bangladesh players announced donations to their respective countries to fight against the deadly Coronavirus, Indian people in social media asking Indian contribute players to contribute for their country as it is also suffering due to the virus. More than 600 people tested positive across the country so far.

Pakistan’s cricket board Chairman Ehsan Mani announced that the players of Pakistan cricket team are donating 50 lakhs collectively to help their country overcome the corona crisis. Meanwhile employees in the board, upto senior the manager level, are donating their one day’s salary. Bangladesh team’s 27 players which consists 17 contracted players, decided to give their half month’s salary to fight the virus. The amount is going to be 25 lakhs excluding taxes, according to the joint statement of the team’s players.

Apart from them, International sports icons such as Roger Federer, Cristiano Ronaldo, Lionel Messi have announced One million each to their respective countries to combat the Corona crisis. These gestures from the sports personalities is being lauded widely by the users of Internet. On seeing these updates, people who are using social media across India started raising questions against the players of the country.

Though there are many messages from top cricketers are constantly surfacing about the safety measurements regarding the pandemic situations, no announcement about any kind of donation has been made by the players of national cricket team. Here’s some of the tweets from online users requesting the players to contribute something for the nation at this situation :

#Pakistan cricket players donate 50L to government…what about our Indian players?… Requesting @imVkohli and @ImRo45 to step up and inspire other players to do the same..#IndiaFightsCoronavirus #COVID2019 #ChineseVirus #WuhanVirus #Lockdown21 #SaluteToAllFrontliners

And how many so called Rich Indian players came forward to donate amidst of #CoronavirusPandemic https://t.co/LYNf21wrMs

@imVkohli
Virat sir I am requested you to please donate to Indian government for fight against corona virus .
You are legend and millions of people of this country following u please come to front and help the nation .
If u legends became front than many of the people to do so.

The country needs financial help. You are such a big player, you cannot do anything for the country, just learn something from Ronaldo except sports.

Comment your views on these reactions of Indian cricket team fans !!