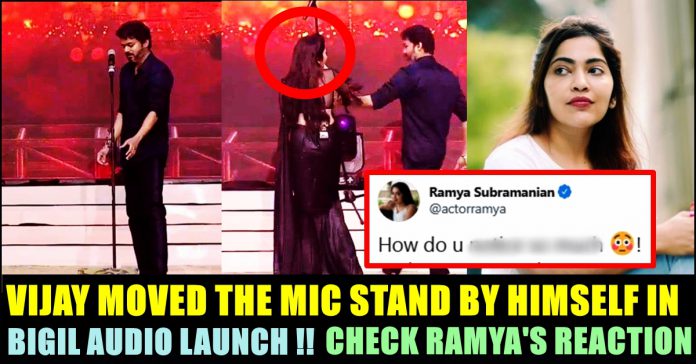 After giving an explosive speech for his fans in Bigil audio launch, Actor Vijay moved the mic stand by himself which was being praised by his fans in social media. They are lauding this activity of the actor and terming it as “Simplicity Level”.

No Words To Describe About My #Thanga Thalapathy Vijay

#Thalapathy is not a celebrity friends he is our own brother

See the kind of simplicity he has…. Such a gentleman

King is a king forever…

Want to learn a lot and lot from him.. #Bigil #BigilAudioLaunchOnSunTv pic.twitter.com/NRGnf0r5mn

Meanwhile, one of a fan tagged anchor Ramya who hosted the event and asked her to comment this attitude of Vijay. Ramya who helped Vijay in moving the mic stand seems to have wondered on the fact of fans noticing so much of his every gesture. In a reply to the Fan, she wrote “How do u notice so much 😳! He is a super gentleman :)”

Vijay stole the heart of his fans with his humorous and sensible speech in the audio launch. After finishing the audio launch successfully, Vijay was seen at Chennai International Airport as he was about to take off to London. He was seen wearing a mask at the security check while he was checking-in his luggage. Photos of Vijay from the airport are doing the rounds on Twitter and Instagram.

Vijay has spent nearly 170 days for Bigil in which he is touted to play two roles, as that of a father and a son. He is expected to be back in Chennai in the first week of October, post which he will begin shooting for for his upcoming film, Thalapathy 64.

Thalapathy 64 will be directed by young filmmaker Lokesh Kanagaraj and it is said to be a one-of-a-kind film which will showcase a new Vijay to his fans. Bigil movie is planned to be released on Diwali, the highly celebrated festival in Indian culture. The trailer is supposed to release a week before the movie’s release.

A shocking report emerged saying that a group of priests in the world famous Thiruchendur Murugan temple attacked a policeman who questioned them for...