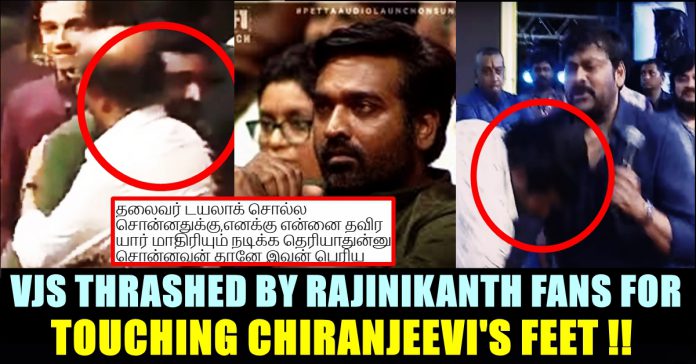 Vijay Sethupathi, one of the busiest actors of Kollywood industry, loved by majority number Tamil cinema fans for his natural way of delivering performances. Irrespective of his market and fan base, the actor is portraying various characters and concentrating in content oriented films. The actor who is very much known for his versatility, played role of a transgender in Super Deluxe, 70 year old theatre artist in Seethakadhi, Police officer in Chekka Chivantha Vaanam. He also played villain for Super star Rajinikanth in Petta movie which was directed by Karthick Subbaraj.

The most awaited film of the actor is Sye Raa Narasimha Reddy along with Chiranjeevi in which he is doing a character named as Raaja Paandi. The film which aims October 2nd release, recently conducted a pre release event. Chiranjeevi, biggest star of Telugu cinema lauded the actor for accepting the film in the event.

“Vijay Sethupathi is the busiest actor right now in Tamil cinema. Producers are waiting for more than two weeks for his dates. But when we asked him to play an important role in the film, he readily agreed for me. Thank You, Vijay Sethupathi”, said Chiranjeevi in the event.

Watch the video of his entry in Petta audio launch here :

In the audio launch, Vijay Sethupathi was asked to utter a dialogue of Super star Rajinikanth in a way of paying tribute to the legendary actor. But the actor denied to do it for some reasons. Some fans who couldn’t forget it started trolling the actor by accusing him as a man with “Double Standards”.

I may be wrong but Vijay Sethupathi feels to me like a person who puts on a false face. I’ve also heard from a person on the inside that he demanded a separate entry during #Petta audio launch.

3 pts from my perspective for vjs to not show the same attitude during petta album launch.
1 vjs might have thought that #Thalaivar is not up to his level to get his blessings
2 vjs worried about after effects from poralis.
3 basically fake AF.
Contd – 1/2

It is notable that Vijay Sethupathi was termed as one of the very few actors who has zero haters in Tamil cinema. But he was criticized by large number of fans once he dubbed for the role of Iron Man in Avengers-EndGame Tamil version.

What do you think on these reactions ?? Comment your views !!

Prime minister Narendra Modi was stuck on a flyover for around 20 minutes on his way to Hussainwala, Punjab as a group of protesting...

This Top CSK Player Failed In YO-YO Fitness Test & Missed To Make It To The Indian Team !! : Disappointing !!

Indian team’s next task is to travel to Ireland for the two-match T20I series, scheduled on June 27 and 29. The squad for the...