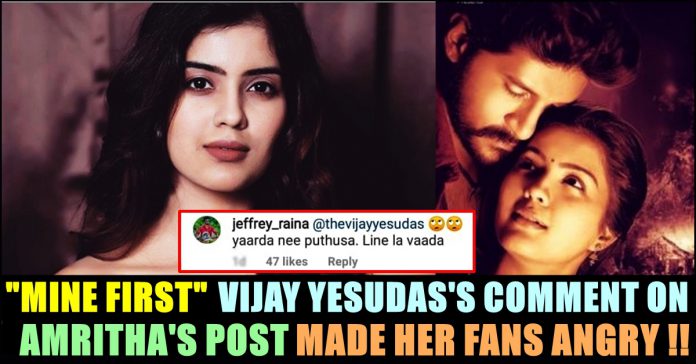 Amritha Iyer became the heartthrope of Tamilnadu youths in no time. Her portrayal in Bigil as captain Thendral gained her vast number of fans and followers. To make herself available to the fans, the actress became active in social media platforms by posting her photos and updates.

Apart from Vijay, Nayanthara, Yogi Babu, The film Bigil had 15 girls as a football team squad. Indhuja Ravichander, Varsha Bollamma, Amritha Iyer are few of the player who were given importance in the movie. Amritha played a role called as Thendral who is the captain of the state team.

Before Bigil, Amritha made her film debut with Padaiveeran, where she played the role of Malar. In the film she paired with singer Vijay Yesudas who is a son of popular singer Yesudas. He debuted as an actor through Dhanush’s Maari. She was later seen playing one of the female leads opposite Vijay Antony in Kaali.

But only after essaying the role of “Thendral”, Amritha became the darling of social media. The actress who is very much active in Instagram, enjoys more than 4 lakh followers in the photo posting social media app.

Now the actress who participated in filmfare award function posted her photos captured in the event in her Instagram account. To one of a post she added a caption saying “Last night for FILMFARE”

To this post, Vijay Yesudas, her co-actor in her debut film posted a comment saying “Mine First 😍😍😅😉”

This comment from the actor and singer forced many of the actress’s fans and followers to react in various ways. Many who didn’t expect him to post such comment started to troll him through their replies. Most of them seemed that they are not aware of the “Padaiveeran” project.

To these comments, Vijay who thought of making them realize that they both acted in a film together wrote “seriyana loosunga ellaarum – oreeyyy track le think pannathenga – Mine first naaa My Heroine in my film Padaiveeran – avlo thaan – proud of her success through Bigil” as his reply.

Amritha also appeared in Atlee’s Theri in an uncredited role. Director Atlee, in a recent interview, requested the upcoming filmmakers to keep an eye on talents like Amritha, Varsha Bollamma and the other female actresses in his film “Bigil” and said that he believes that they have the potential to become leading heroines of Tamil cinema such as Samantha and Kajal Agarwal.

What do you think on these comments of Vijay Yesudas ?? Comment your views below !!

After expressing his disappointment during the innings break for adding Yuzvendra Chahal as a concussion player, Justin Langer, Australian head coach getting brutally trolled...

Jwala Gutta, Indian badminton player who represented India in International matches exposed the abusive texts she received for posting a self motivational quote in...

Famous Kollywood Celebrity Got Thrashed For His Speech About “Periyar” Statue!!

For instigating public to break the statue of reformer Periyar which is placed opposite to a temple, stunt choreographer Kanal Kannan who predominantly works...

Director/Actor Parthiban Shared His Whatsapp Chat With Thalapathy Vijay On His Birthday !! Check Out !!

Actor Vijay made his twitter account active after almost 8 months to make announcement about his upcoming movie's title and poster. Two massive posters...