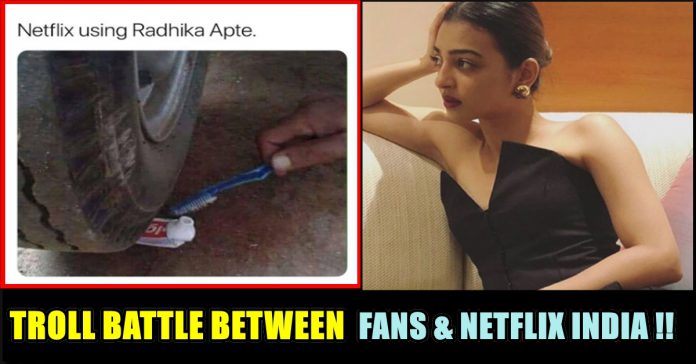 With Lust Stories, Sacred Games and now Ghoul, Radhika Apte is all over Netflix. Her constant presence in shows bankrolled by the online streaming giant has inspired a series of priceless memes. Check them out:

Director : we have to cast Nawazuddin Siddiqui

Producer : we have booked her years

When you open Netflix. pic.twitter.com/PrHbsidvKM

New Android update. Found a #RadhikaApte app on my phone.

However, Netflix is beating the meme-makers at their own game with their hilarious response. Playing up their obsession with Radhika, Netflix released a two-minute spoof video featuring the actress and filmmaker Vikramaditya Motwane.

The clip is seemingly a behind-the-scenes video of an upcoming show titled Omnipresent, which will have Radhika playing every role. The video ends with Netflix rechristening itself ‘Radflix’.

Netflix shared the video on Twitter with the caption, “Whatever the role, Radhika apt hai.”

For his comment Netfix India trolled him back hilariously as well :

The role of Aamir on this comment is also played by Radhika Apte. Not just this, the actress got a special mention in the announcement that Pad Man was now streaming on the platform.

Trollers used this tweet’s comment section to troll as well. Check out some of the main comments here :

Only reason Netflix killed Radhika Apte in sacred games so they can cast her in other Netflix web series.
Busy woman.

Change ur name frm netflix to radflix for smetym.. I love her thou.. 😍

Netflix: hi
Radhika: Darling, we’ve got to stop meeting like this. This is how rumors begin.

The guy who’s managing Netflix India’s twitter is bloody good at his job..

If you really want to troll (atleast the south) update the Title like so pic.twitter.com/CW2wSudcnY

When Radhika was asked if she is “omnipresent” on Netflix, she told PTI, “I was very happy. I think it is a great compliment because it is such a great platform. Who would not like to be a part of the projects from Netflix?”