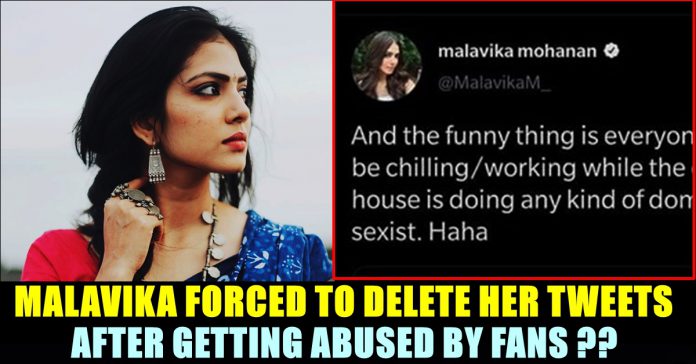 Malavika Mohanan, a recent sensation among youngsters, yesterday almost proved that she is bold enough to question against gender bias but forced to delete her tweet due to the hatred spewed by fans. Unlike other heroines, Malavika rose to fame through her photoshoots among Tamilnadu youngsters. Being acted in the mega budget blockbuster film “Petta”, Malavika grabbed a special place among Tamilnadu youngsters only after committed to do the female lead in Vijay’s upcoming film “Master”.

Fans making posters and illustration is normal nowadays. Especially when is comes to their favourite hero’s movie, they will find all the ways to put extra effort to express their love towards their idol. One such fan recently made an illustration, showing how the team members of “Master” are spending their quarantine times. “Master” was supposed to release on 9th of April but got postponed without further notice due to coronavirus outbreak in the country.

The illustration showed actor Vijay relaxing himself by hearing music as in few official posters of “Master” and his co-actors Arjun Das and Vijay Sethupathi were seen playing ludo game. Director Lokesh Kanagaraj was playing a game in his phone and one of a producer Jagadish was seen sitting with his laptop. Publicity Designer Gopi Prasanna and Music director Anirudh Ravichander was seen doing their respective works. Actress Malavika Mohanan was preparing food for them in kitchen.

Check out the illustration here :

As Malavika Mohanan was tagged in several posts of this illustration, it grabbed the attention of the actress who immediately came up with a disagreement with the concept of the illustration. The actress, in her first tweet, she directly said that the design is “So sexist”. She asked why the only female in the house is doing domestic work while everyone else seems to be chilling/working.

In another tweet, Malavika wrote “The task of a woman even in a hypothetical “movie house” is to cook ? When will gender roles die ? Sigh”. Here’s the screenshot of it :

However both the tweets are deleted by the actress for unknown reasons, only the screenshots are doing rounds in the micro blogging social media site. Many including singer and Metoo activist Chinmayi felt that Malavika Mohanan should not have deleted her tweet. Chinmayi believed that the actress got bullied, harassed abused to delete her her.

Check out her take on this :

A professional actor questions a fan-made illustration for portraying HER 'role' in a way SHE didn't like. She gets bullied, abused and harassed into deleting her tweet. Said sexist 'cartoon' gets close to 1000 Retweets. https://t.co/zfdg7ZxpjG

Check out the opinions of others below :

Ironically, this was the first thing that I felt on seeing that picture. Looks like #MalavikaMohanan felt it too, but then had to delete it. @Chinmayi is right. Twitter hate isn't easy, and yes, it can affect people. It's okay if she wants to stay away from it. pic.twitter.com/HMi8pso3Bw

Hi @MalavikaM_ you should not have deleted it 🙂

There is nothing offensive in what you have tweeted. The message is crystal clear and the fans would have understood it. pic.twitter.com/x4iC7UXmmU

Master film has Malavika Mohanan as a love interest of actor Vijay which is evident through “Antha Kanna Paathaka” lyric video. On the work front, Malavika is expected to sign many Tamil movies post lockdown.

On Wednesday, former Indian captain Mahendra Singh Dhoni turns 40 and is receiving wishes from across the country. Several cinema celebrities, players of Indian...

Vanitha Mentioned “Durga” To Abhirami In The First Promo ! Check Out To Know Who She Is !!