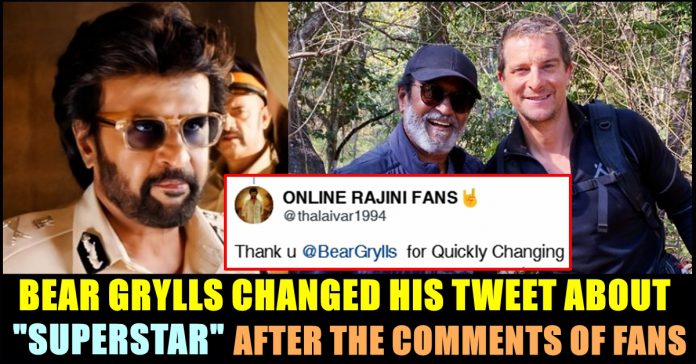 Super star Rajinikanth made the headlines once again after the news of himself taking part in the survival program Man Vs Wild surfaced. The show which is popular among the fans across the world is about Bear Grylls helping people to understand how to survive in forests. Bear Grylls, is a British former SAS serviceman, survival instructor, and honorary lieutenant-colonel, and, outside his military career, an adventurer, writer, television presenter and businessman. He widely known for his show Man Vs Wild which is getting its telecast in Discovery channel.

After Prime Minister Narendra Modi, Superstar Rajinikanth nodded to take part in the adventurous show. Since the announcement, fans of the actor are very much excited to witness their “Thalaivar” in a new avatar. It is notable that it is Superstar Rajinikanth’s television debut.

Rajinikanth began shooting for the special episode on Tuesday in forests around Karnataka’s Mysore. “I have finished shooting for the ‘Man vs Wild’ episode. I have not received any wounds but some scratches due to little thorns. I am alright,” he told reporters at Chennai airport after the shoot, news agency ANI reported.

Ahead of the show’s telecast, Bear Grylls who enjoys 15 lakh followers for his official twitter account has posted a tweet earlier today. Initially, Bear posted a tweet mentioning Rajinikanth as “Bollywood” Superstar which grabbed the attention of the fans. Many fans requested Bear to change it as “Superstar” as he is not a Superstar for Bollywood alone.

Check how fans expressed their disappointment over the tweet of Bear Grylls :

He is not Restricted to Bollywood cinema sir, He is the BIGGEST SUPERSTAR OF INDIA Basically Frm #Kollywood !!#ThalaivaonDiscovery pic.twitter.com/el3h4WTnxb

Followed by the several number of requests from fans, Bear changed his tweet from Bollywood Superstar to “Superstar”. Check out his current tweet here :

After our episode with Prime Minister @NarendraModi of India helped create a bit of TV history, (3.6 billion impressions), superstar @Rajinikanth joins me next, as he makes his TV debut on our new show #IntoTheWildWithBearGrylls on @DiscoveryIN. #ThalaivaOnDiscovery pic.twitter.com/WKscCDjPZc

Fans of the actor thanked Bear for changing his tweet. Check out their reactions after Bear changed his tweet :

Edited, from ‘Bollywood Superstar’ to ‘Superstar’.

Thank u @BearGrylls for Quickly Changing the Caption frm Bollywood to Superstar by understanding tat He is Indian Superstar !! #ThalaivaonDiscovery

Comment your views on this gesture from Bear Grylls !!

On the 142nd birthday of social reformer Periyaar, former news reader Anitha Sampath who is known for participating in the fourth season of Bigg...