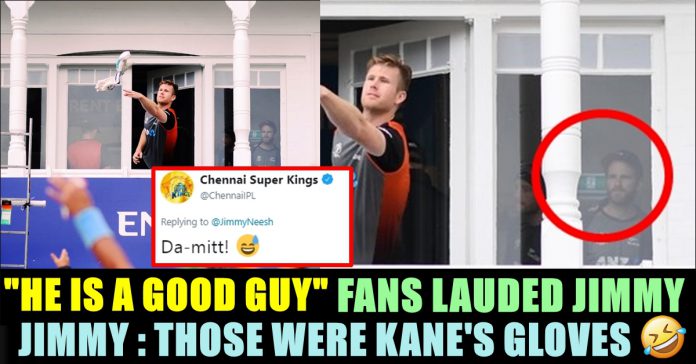 India’s third match in the World Cup, against New Zealand, was abandoned Thursday without a single ball being bowled in Nottingham, England, due to rain. Frustrated Indian fans began venting out their anger after missing an opportunity to watch a thrilling match and most of them blamed the ICC. The hashtag #ShameOnICC was among the top trends even on Friday morning.

Jimmy Neesham, all rounder of New Zealand cricket team, yesterday lauded by fans for presenting them the gloves as a sign of love. It was recognised by many fans who believed that those fans who missed to witness the match, despite of buying ticket, deserved something.

Even ICC posted a humorous tweet on Jimmy’s act with writing a caption which read as “us: that Jimmy Neesham seems like a nice guy
@jimmyneesh: hold my gloves”

us: that Jimmy Neesham seems like a nice guy@jimmyneesh: hold my gloves pic.twitter.com/kQ6VVrey02

However Jimmy Neesham, today came up with a hilarious reply to ICC by saying that those Gloves belongs to Kane Williamson who will be seen in the picture in out of focus staring at Jimmy Neesham. What more funny is Jimmy cropped and added the picture of Williamson in his post. His post read as “They were actually Kane’s gloves 😂”

They were actually Kane’s gloves 😂 pic.twitter.com/hsf5bchwj1

He also replied to a fan who suggested ICC to turn cricket field into swimming poola nd let the players swim in it as contest. To this tweet Jimmy funnily said that it is ok with him but there will be no refund for that.

Ok but no refunds https://t.co/4G5Wl7dVBM

These tweets of Jimmy left many fans in splits including the official twitter handle of Chennai Super Kings who came up with even more funnier counter attacks. Check out some of them here :

Mate you’ve just made those fans a lot more happier 😍

He would have loved to give them as well.😂❤

However you got the credit of kindness 😃

Reminds me of my Childhood days of distributing my Friends things 😂

us: that Jimmy Neesham seems like a nice guy@jimmyneesh: hold Kane’s gloves 😂😂😂

Jimmy is very much known for his funny tweets and replies to his followers. It is no wonder to have him in his best as far as twitter is concerned as the onfield match was cancelled.