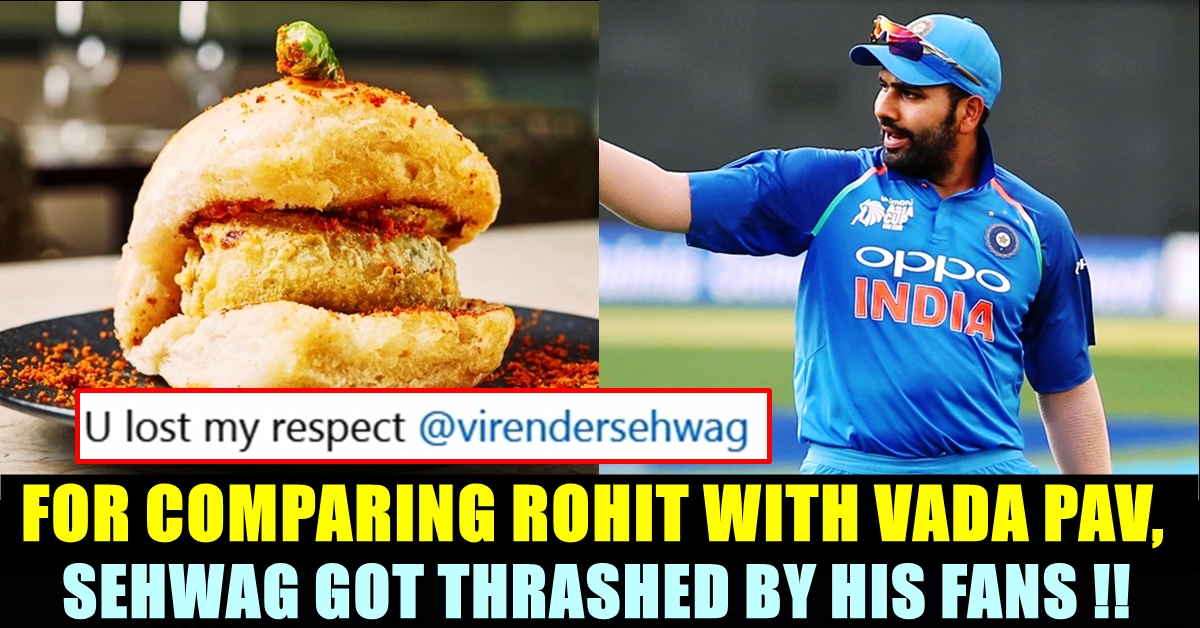 Day after the match against Chennai Super Kings and Mumbai Indians, former Indian opener Virender Sehwag came up with a video for his show “Viru Ki Baithak” in his official Instagram account in which he enjoys 57 lakh followers as of now. In the video, he made extreme fun of Chennai Super Kings, the losing team. Disguising Tamil Superstar Rajinikanth, Sehwag trolled CSK by saying “Even Rajinikanth can’t save this team”.

In the same video, while talking about Rohit Sharma being replaced by Saurabh Tiwary due to injury, Sehwag compared the cricketers with Vada Pav and Samosa Pav. After two days, the video got enough attention to get slammed by the fans of the Mumbai skipper.

Chennai Super Kings faced a 10 wicket loss against Mumbai Indians on Friday night in their second face off. In his 36th episode of his show “Viru Ki Baithak”, Virender Sehwag decided to disguise as Superstar Rajinikanth to troll team Chennai. “Enna Rascal, mind it” Sehwag starts his video thinking that he is imitating Superstar Rajinikanth.

Sehwag started his show by asking his followers how could he do a show that lasts longer than an entire match’s duration, trolling how Chennai let Mumbai chase the target in the 13th over itself. “Yesterday, I went to bathroom and by the time I got back, half of your team was already back in the pavilion” he trolled Chennai.

He further said that the fans of team Chennai are wondering if the sound that comes from bat when ball hitting it, is coming from stumps due to their poor batting. He also explained how poorly the top order batsmen of CSK outplayed by Bumrah and Boult. “Pollard won the toss and decided to bat first. Rohit wasn’t playing. But so what if Vada Pav is injured ? His spot was taken by Samosa Pav. I mean Saurabh Tiwary. Understood why ?” the cricketer winked at his followers.

Even Rajini'Can't' Save Chennai. Catch the fresh episode of 'Viru Ki Baithak' every morning only on Facebook Watch #CricketTogether

Sehwad who called “Chennai Super kings” as “Senior citizens club” lauded Sam Curran by saying that he is the only youngster in the team. “Just like we squeeze the last drop out of the toothpaste, Chennai squeezes Sam in the same way.” he said in his video.

Now, after two days, the video went viral among the netizens and failed go well with them. Especially, fans of Rohit Sharma got extremely disappointed on seeing their idol getting body shamed by Virender Sehwag. “That’s not sarcasm …It’s an Insult u creep” said one of a fan whereas another one wrote “The fame u got with ur batting goes in vain with a single statement. U lost my respect”

A fan went one step ahead and posted a video of Sehwag getting run out in a match against Sri lanka due to his lethargic attitude and carelessness.

look at your laziness, attentiveness, and responsibility before commenting on another player's fitness @virendersehwag https://t.co/Jybmc0PBgD pic.twitter.com/qTMfRUhBtZ

Check out some of the reactions from Rohit fans :

The fame u got with ur batting goes in vain with a single statement
U lost my respect @virendersehwag https://t.co/UYTPesTgEa

Act of shamelessness from @virendersehwag

Thank god @ImRo45 didn't wish him 4 days ago. LOL instead, should have made a joke on his batting. This wasn't funny by any means.

BTW U were Rohit's fav. in his childhood 😂 https://t.co/rzrRIfZ7LZ

Comment your views on these reactions Sehwag is receiving !!