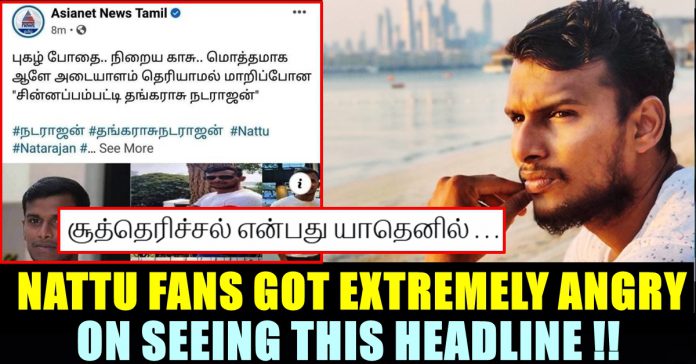 Thangarasu Natarajan became an irreplaceable assert of team India as he proved himself in the 4 matches he played in the Australian tour. The left arm pacer from Salem, Tamil nadu has grabbed a separate place in the team through his outstanding performance in the T20 series. He picked 6 wickets in the three matches he played with an economy below 7 runs per over which impressed critics and fans.

Entire Tamil nadu went gaga over Natarajan’s performance in the Australian tour. Along with fans, cinema actors, political personalities and sports experts lauded the left hander for displaying his skills in the finest way. In his debut T20 international, Nattu picked three important wickets by conceding just 30 runs in the four overs he bowled. In the second match, he conceded just 20 runs by picking 2 important wickets. In the third T20 International, Natarajan picked an important wicket of Maxwell and conceded 33 runs in the four overs he bowled.

Cricket experts and fans highly believe that Natarajan is an excellent find of this year’s IPL and comparing him with the legendary left hand seamer of India, Zaheer Khan. Nattu is expected to replace him by improving his abilities. Hardik Pandya, after receiving the man of the tournament award, handed it over to Natarajan saying that he deserves the award for bowling well in the tough conditions.

Natarajan, you were outstanding this series. To perform brilliantly in difficult conditions on your India debut speaks volumes of your talent and hardwork 👏 You deserve Man of the Series from my side bhai! Congratulations to #TeamIndia on the win 🇮🇳🏆 pic.twitter.com/gguk4WIlQD

Natarajan who came from a poor background, is finally seeing the light of the day through his sheer hard work. While doing his part for the country, Nattu is also spending some quality time in Australia. He has been sharing the pictures of himself from Australia through his official Instagram account.

Check out some of his recent posts below :

He also posted pictures from Dubai while playing for Sunrisers Hyderabad in Dubai.

On seeing these posts, a popular news portal made a news with a headlines saying that Natarajan got addicted to fame. The news also said that he started earning so much and money and changed his appearance a lot. Check out the screenshot of the news headline below :

Agitated fans, started slamming the news portal which published such news about Natarajan. A twitter user asked whether he is not allowed to wear new clothes which he bought with his own money after all the struggles he went through. Another user said that Nattu wore tattoo while he was playing in Tamil nadu premiere league.

Check out some of the reactions for their new post below :

Natarajan who belongs to Chinnappampatti of Salem, is 29 years old now. His father is a Saree weaver and his Mother ran a road side shop where people fell in love with her beef fry. He was the eldest of his five siblings. In the year 2011, Natarajan came to Chennai from Chinnappampatti to pursue his cricketing career. In his earlier days, Natarajan represented several villages in the tennis ball tournaments. Natarajan is a big name among the villages for his performance in the 6 over a side Tennis ball tournaments. After having an excellent IPL tournament, Nattu looks promising to grab a permanent place in team India.

Previous articleJUST IN : First Eviction Of This Week Leaked !!
Next articleCONFIRMED : This Contestant Is Going To Get Evicted On Sunday’s Episode !!