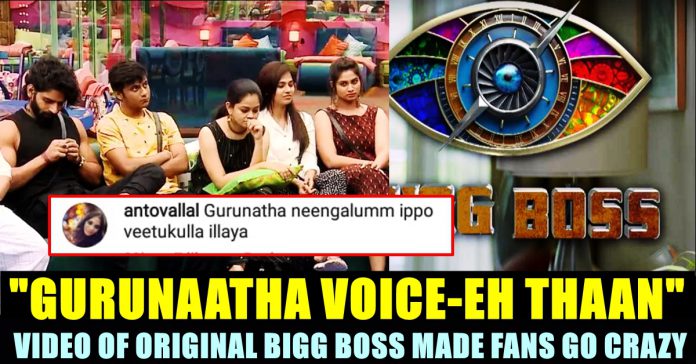 Fans Got Excited On Seeing This Video Of Original BIGG BOSS !!

After seeing a video uploaded by Sasho Satiiysh Saarathy, the man who lent his voice for Tamil Bigg Boss, fans got excited and posting comments expressing their love towards his voice. Most recently, it was revealed that Sasho who is also known as Sasho, performed as “Bigg Boss” in the Tamil version of the show. Now, he uploaded a video in his official Instagram account uttering a quote only to leave the fans in a surprised state.

We all should have wondered who could be the person lending voice for Bigg Boss at least once in these four years. There were several speculations kept surfacing in Internet regarding who could be the person lending the voice for the Bigg Boss in the cash-rich reality game show. Initially they said that Vijay TV actor Amit Bhargav who is known for acting in a serial named “Kalyanam Mudhal Kaadhal Varai” is the one who plays the role of Bigg Boss behind the camera. However, when media approached, he completely denied it and said that he lent voice for Kannada Bigg Boss once but never worked with the management of Tamil Bigg Boss show.

Later, many people believed that “Maanada Mayilada” fame Gokulnath is the one who is providing orders to the contestants of Bigg Boss. It turned out to be a mere rumour as well. Recently, it was revealed that an artist named “Sasho Satiiysh Saarathy” who is known for acting in a Bollywood film named “Manjunath” is acting as “Bigg Boss” in the Tamil version.

The fourth season of Bigg Boss show got completely with Aari Arjunan winning the title. Balaji Murugadoss became the runner up and Rio Raj grabbed the second runner up spot. Throughout the four seasons, celebrities who participated as contestants had a good bonding with the Bigg Boss voice and always obeyed him.

On hearing Bigg Boss voice for the first time from a real human, fans got excited and started expressing their emotions in the comment section of Sasho’s post. “Thupuchuku thupuchuku Bigboss🔥” wrote a fan and another one said “Man with the magical voice.. The voice of confidence😍”

According to Vikatan, the one who is giving orders to contestants from season one is Sasho. He who belongs to Tamil nadu, is known for his works in Bollywood. The 2014 film “Manjunath” had Sasho Satiiyish as a protagonist. The film is based on the true story of Manjunath Shanmugam — the Indian Institute of Management Lucknow graduate who was killed in Lakhimpur, U.P.

Check out some of the recent posts of the original Bigg Boss :

Dreams of team India winning the T20 world cup for the second time shattered after the Kohli led team faced a humiliating loss in...