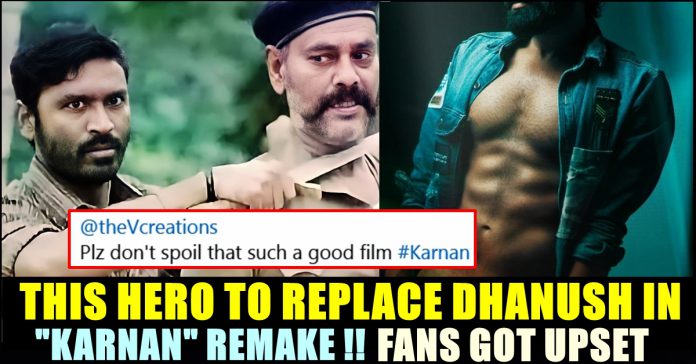 While the national award winning blockbuster film “Asuran” is getting remade in Telugu, his latest film of Maari Selvaraj titled “Karnan” is also going to be remade in the Tollywood industry, according to reports. The film was received extremely well by the audience and got acclaimed by the critics as well. Now, it has been reported that the Telugu rights got bagged by producer Bellamkonda Ramesh. Reports also suggested that his son is going to replace Dhanush and fans of the original has been expressing their disagreement with the move of the makers.

Karnan’s plot revolves around a fearless youngster fighting against the influential people who are oppressing the villagers. The period film which is set in the suburbs of Tirunelveli district, talks about the struggles faced by the people who belong to a small village named “Podiyankulam”.

One of the main problems which acts as a barrier for the growth of “Podiyankulam” residents is the absence of government buses and a bus stop. As a result, people are finding it difficult to make ends meet. Men couldn’t go to work, Pregnant women couldn’t make it to the hospital at the right time and youths are finding it difficult to get educated.

It has been reported that the film got collected Rs. 10. 50 crore on the first day and became the first film of Dhanush to reach such number of the first day itself. Critics are also lauding the film’s intriguing content and the performances of the leads. From Vijay Sethupathi to ace cinematographer PC Sriram, almost all the celebrities expressed their awe after watching the film. Notable political personalities also posted tweets appreciating the film.

Now, a latest report emerged saying that the film’s Telugu remake rights were sold to popular Telugu producer Bellamkonda Suresh. His son Bellamkonda Sai Srinivas is going to replace Dhanush in the Telugu version, said reports. As soon as knowing about the update, fans of Dhanush and Tamil cinema started expressing their disappointment.

Many felt that a film like “Karnan” must be left untouched whereas others said that the performance of Dhanush couldn’t be replaced by any other actors. Check out some of such reactions below :

@theVcreations
Plz don't spoil that such a good film #Karnan by giving rights to Tollywood industry to remake it..
It's a master piece and no one can #Karnan role better then @dhanushkraja
Please try to dub it but don't give rights to remake …

Dhanush recently announced that he is going to join hands with Maari Selvaraj again. “Elated to announce that after the blockbuster success of Karnan, Mari Selvaraj and myself are joining hands once again. Pre production going on, Shoot will commence next year.” the actor said in his tweet.

Elated to announce that after the blockbuster success of Karnan, Mari Selvaraj and myself are joining hands once again. Pre production going on,
Shoot will commence next year.