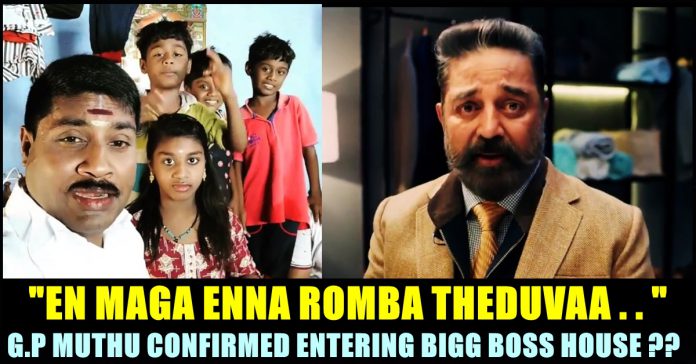 Followers of popular youtuber G.P Muthu found that he is going to spend his quarantine period to participate in the Bigg Boss show, hosted by Kamal Haasan as he released a series of videos in his Instagram timeline, saying that he is leaving to a town and will be back in 10 days. As the date of the Bigg Boss inauguration has been announced, fans calculated and concluded that Muthu is going to spend 10 days of quarantine period before entering the Bigg Boss house. It is notable that Muthu uploaded a picture of himself posing with the BIGG BOSS banner went viral in social media platforms, weeks ago.

Most recently, Ulaganayagan Kamal Haasan appeared in a promo and announced that Bigg Boss season 5 will start airing in Vijay Television from 3rd of October. In the promo, Kamal could be seen rehearsing to welcome the celebrity contestants and said that it is hard to be himself in the Bigg Boss house. Watch the promo below :

Till the inauguration, speculations on the 15 celebrity contestants will do rounds in the online platforms, is something we all know. Now, Super singer host Priyanka Deshpande, Popular comedy actor Imman Annachi and many other names are doing rounds as confirmed contestants. Now, a series of videos uploaded by youtuber G.P Muthu, made his followers to conclude that the latter is going to enter the cash rich show as one of the contestants.

On Wednesday, GP Muthu uploaded a video with his children saying that he is leaving to town and will be back in 10 days. “My daughter will search for me. I will be missing them so much. Now, I am giving them Rs. 100 each” says G.P Muthu and asks his children not to blast crackers until he returns. He also kisses his daughter before leaving and says to his followers that he will be posting videos after he comes.

In the next video, GP Muthu uploaded a video with one of his fans while going to Chennai and said that he is going to drop him at the bus stand.

“Friends, we are leaving to Chennai. We have bought food from “Palayamkottai Bhai Kadai Biriyani”. They sell Biriyani for only Rs. 70 but it will taste extremely good. It feels hard to leave my children” Muthu says in the next video.

On seeing these videos, his followers predicted that Muthu is going to spend his quarantine period to participate in the Bigg Boss house. Check out some of the reactions below :

G.P Muthu lives in a village named Udangudi which is located in Thoothukudi district. Repairing old windows, doors which were made of wood was his occupation. He is also running a lumber shop in his village, says reports. He who has four children, started uploading videos in Tik Tok during his work time to engage himself. With Tik Tok being a widely used mobile application at that time, videos of G.P Muthu went viral among the users of it. Now, he owns a youtube channel that enjoys nearly 1 million subscribers. Comment your views on Muthu entering Bigg Boss house !!

Previous articleDale Steyn Gets Slammed By The CSK Fans On His Comment On Raina!!
Next articleActor Chandramouli Exposed A Serial Offender Who Spammed His Wife’s Posts !!

As the entire state is in utter shock on knowing about what happened in Sathankulam, Thoothukudi, people who are using social media wants Superstar...

Days after replying to a troll in Instagram, upcoming actress Anikha Surendran replied to another Instagram user who advised her not to wear too...