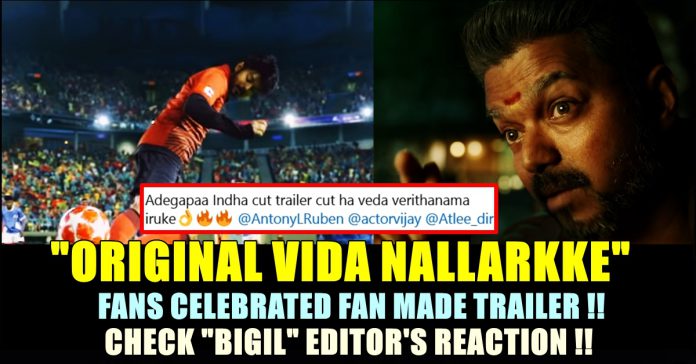 No words could describe the craze level that is being created by Bigil Trailer. Director Atlee, who himself a biggest fan of actor Vijay, carved the actor inch by inch it seems. The most awaited trailer of Bigil released on Saturday and left the Internet in explosion. The film which marks the third collaboration of Atlee and Vijay, has actor Vijay in the lead in three different get ups.

The trailer ticked all the boxes of the expectation list of a Vijay fan. Looking like a emotional action drama, Bigil trailer promised an absolute treat for the fans who are waiting for it since past one long year. Within 3 days since release, the trailer of Bigil reached 2 million likes and became the fastest most liked trailer in India after by beating Shah Rukh Khan’s “Zero” trailer.

As soon as the trailer released, fans started celebrating in their own way. Meanwhile, one of a fan made his own version of trailer by using the clips which got placed in the original trailer. He used the audio songs of the movie to make it like a different one from the original version.

Check out that trailer here :

The person who made this trailer is Gokul Venkat and he was lauded by many fans and celebrities for his creative work. Few fans even said that the fan cut version looks cool than the original version itself. Shanthanu, ardent fan of actor Vijay and popular actor denied it by replying to one of a fan.

The fan wrote “Adegapaa Indha cut trailer cut ha veda verithanama iruke👌🔥🔥” in his tweet. Check out his tweet below :

To the fan Shanthanu said “It’s not better ! It’s jus another good version ! Main padathuku cut pant appo u have so many factors to keep in mind which is not an easy job at all ! I think @AntonyLRuben has done a fab job editing #BigilTrailer 🔥👍🏻”

It’s not better ! It’s jus another good version ! Main padathuku cut pant appo u have so many factors to keep in mind which is not an easy job at all ! I think @AntonyLRuben has done a fab job editing #BigilTrailer 🔥👍🏻

Editor Ruben who edited the “Bigil” movie is one of the busiest editors of Kollywood industry. He worked in many of the recent films and Viswasam, Aramm, Kanaa, Irumbu Thirai are some of the significant works he done so far.

To this tweet of Shanthanu, Ruben politely thanked the actor for his acknowledgement. “Thanks a lot brother for the acknowledgment 🤗❤️” Ruben’s tweet read. Fan Trolled “BIGIL” Editor For Praising God !! He Shut Him Down With A Savage Reply !!

@imKBRshanthnu Thanks a lot brother for the acknowledgment 🤗❤️ https://t.co/MjhSG4JYSo

Which one do you think the better one and comment your views on Ruben’s sweet gesture !!

Previous articleFirst Ever BIGG BOSS Contestant To Meet Madhumitha In Her House !!
Next articleKamal Haasan Says That Regrets For Titling His Film As “Devar Magan” !! WATCH !!

Video jockey Parvathy who is pretty much interactive with her followers in social media platforms, often compared with former adult star Mia Khalifa for...

Celebrities Wished Dhoni On His Birthday !! But Sehwag Tops All Of Them In His Own Way !!

Former Indian skipper Mahendra Singh Dhoni on Saturday turned 37 and warm birthday wishes poured in for him not just from the cricket fraternity but...