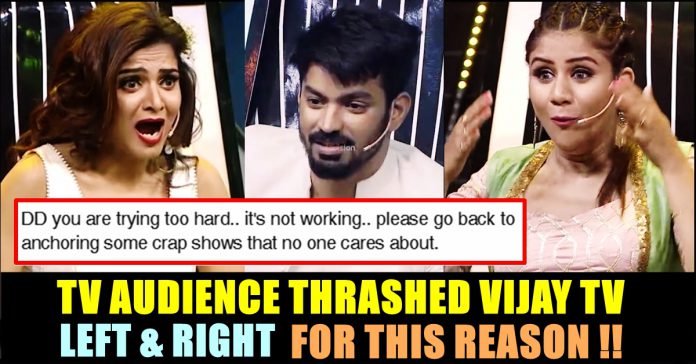 Fans Disappointed With This Show Of Vijay Television !!

Vijay television is very well known for the reality shows it is streaming. From Jodi Number One, Kalakka Povathu Yaaru to Bigg Boss Tamil, the channel always surprised its audience and is being considered by fans as a pioneer for its competitors. Many of its shows were ripped off by other channels with different names about which the Tamil TV audience are very much aware.

But this time, the channel has disappointed its audience it seems. Vijay Tv has recently launched a dance based reality show and named it as “Dancing Super Stars”. The previous dance shows conducted by the channel such as “Ungalil Yaar Adutha Prabhu Deva”, “Jodi Number One”, “Kings of Dance” became huge hit and received positive response from the audience. But this recent show made the audience angry, not because of the performances of the contestants but because of the Judges they chose to evaluate the performances of the contestants.

Unlike previous occasions where Vijay Tv made leading dance masters as Judges for such shows, this time the channel has roped in few TV stars who worked in the channel. Apart from Dance Master Sandy and Sunitha, the other judges of the show were never made any recognizable dance performances, according to the Netizens. Anchor DD Neelakandan, Alya Manasa, actor Mahath are the other judges employed by Vijay Television. The show is being hosted by Rio and Andrews.

Check out the recent promo of the show :

Check out some of the reactions from the followers of Vijay Tv’s social media accounts for having the trio as Judges :

DD you are trying too hard.. it's not working.. please go back to anchoring some crap shows that no one cares about.

So annoying! How can u guys tell these peoples r judge?? #mahath #dd #alya
So so stupid! Confirm tis show will flop
Next time.. Hire some true masters not tis idiots

Star Vijay, most commonly known as Vijay TV, is an Indian Tamil-language pay television channel that was launched in 1994 by the Star TV network. This Channel is a part of Asianet Digital Network. It is one among the oldest private Tamil TV channel in India.

What do you think on these comments received by Vijay Tv ??Comment your views below !!

Previous articleVirat Kohli Revealed The Crime He Committed Along With Dhoni !!
Next articleNayanthara’s Strategy To Hide The Tattoo Of “Prabhu” !! Famous Actor Revealed !!

India Captain Virat Kohli today said he does not want to get rid of his beard as it suits him. “I really like it. I...

An alleged screenshot of Swaminathan Gurumurthy, a RSS ideologue mocking actor Vijay while answering about his financial contribution to Corona crisis is doing rounds...