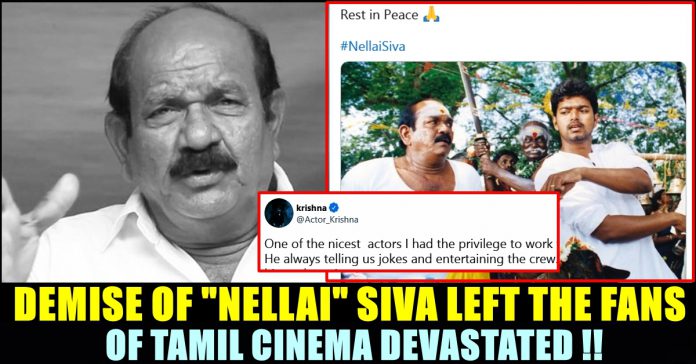 Popular comedy actor “Nellai” Siva who is known among Tamil film audience for the his collaboration with comedian Vadivelu, died at 6 PM of Tuesday due to cardiac arrest at Tirunelveli district, according to reports. He was 69 years old and the news on his demise left the fans and celebrities of Kollywood cinema devastated. He was acting in the “Pandiyan Stores” television serial in a supporting role and the way he delivers the peculiar “Nellai” slang in the movies he acts has a separate fan base.

Known as his stage name “Nellai” Siva, Sivanathan Shanmugavelan Ramamoorthy was predominantly acting in Tamil films. He reportedly acted in 500 plus films and is known for acting in films such as Mahaprabhu, Vetri Kodi Kattu, Kannum Kannum. He was debuted through “Aan Paavam” in the year 1985.

He shared screen space with some of the high profile stars of Tamil film industry by acting in films such as Saamy, Anbe Sivam, Thirupaachi, Kireedam and much more. During 2000s, he acted with top comedy actors Vadivelu and Vivekh and got recognized for his unique slang. Demise of the artist, left the fans and celebrities devastated.

Siva was last seen in the Trisha starring “Paramapatham Vilayattu” which was released in Disney plus hotstar during April month. Fans have been sharing videos and posts remembering the seasoned actor.

One of the nicest actors I had the privilege to work with. He always telling us jokes and entertaining the crew. May his soul rest in peace ayya.#nellaisiva pic.twitter.com/vofbGXgsOQ

Its saddened to hear the sudden demise of the Comedy Artist #NellaiSiva 💔 pic.twitter.com/teCHBNuifc

Saddened to hear that Actor #NellaiSiva has passed away today. Our deepest condolences 🙏 pic.twitter.com/kJ9st0tkpE

A comedian who has unique body language and smile…….. As a Nellai Girl I personally miss u #NellaiSiva sir. May his soul rest in peace.#RIPNellaiSiva pic.twitter.com/hwPDG5T24O

The demise of Comedian Nellai Siva made the Cinema world sad… The last film he acted with me, soon it will be on big screen… I pray to lord to console his family for his demise.. May his soul RIP..@PROSakthiSaran @nellaisiva @News18TamilNadu @news7tamil @maalaimalar pic.twitter.com/rZpaCb1JDi

Let us pray for the soul of “Nellai” Siva to rest in peace !!

Previous article“Where Is The Foreign Aid That Was Given ??” – Kollywood Actress Questioned The Demise Of 11 Patients
Next articleAlcohol Lover Quoting Reinhold Neibuhr Stunned Internet !! MUST WATCH

The winning duo Vetrimaaran and Dhanush have announced the title of their next movie titled Asuran.  Earlier the actor shared the first look of...