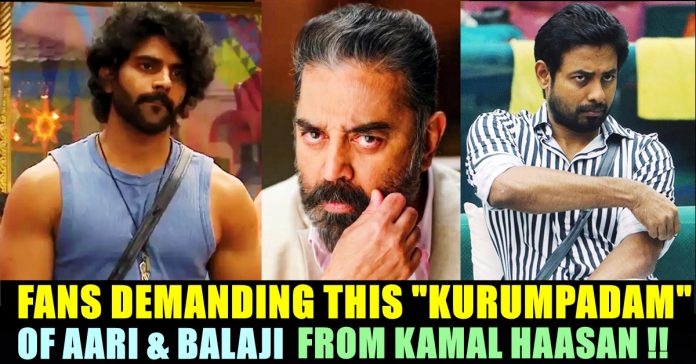 Balaji Murugadoss’s contradictory behaviour inside the Bigg Boss house made fans to demand “Kurumpadam” from host Kamal Haasan. The ongoing Bigg Boss show went past 50 plus days but didn’t see a single “Kurumpadam” so far. Contestants who followed the three seasons keenly, are refraining themselves from getting involved in a “Kurumpadam” it seems. However, fans couldn’t keep calm as they started making their own “Kurumpadams” and letting it do rounds in the social media platforms.

On the Wednesday episode of the show, Balaji Murugadoss, one of the Bigg Boss contestant confronted his co-contestant Aari and denied what he said earlier. After finishing his call with Archana, Bala was questioned by Gabriella for a statement he made in Kamal Haasan episode regarding Aajeedh. While answering to it, Bala happened to have an argument with Rio and others.

On seeing majority number of the housemates making statements against him, Bala got frustrated and said “everybody who wants to become hero and heroine, come and have an argument with me. You will become one” by snapping his fingers in front of all the housemates. Aari who got offended by his body language, called out Bala by imitating him. However, Bala denied doing it and said that he did it in a different body language.

Fans who are keenly following the show, uploaded the video footage of Balaji snapping his fingers and demanded the video as a “Kurumpadam” to Kamal Haasan, host of the show.

“Kurumpadam” is nothing but a short film that will be played by Kamal Haasan when a problem doesn’t reaches its solution. The “Kurumpadam” culture started when Julie, a contestant of season one behaved strange. The lack of “Kurumpadams” in the ongoing season made fans extremely disappointed as they feel that contestants are taking it for granted and behaving atrocious.

Aari is a Tamil film actor who debuted through Rettaisuzhi (2010) produced by director Shankar. He had a breakthrough performance as Murugan in Nedunchaalai. Aari has also played a pivotal role in the supernatural thriller Maya, Maalai Pozhuthin Mayakathile etc.