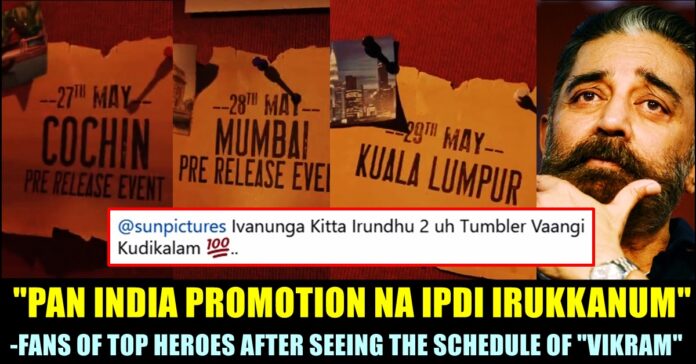 On Thursday, Raaj Kamal films international came up with a post in their social media handles updating about their schedule for the promotion of “Vikram” in the upcoming days till the film’s release. The video informed where and when Kamal Haasan and crew are going to be present to promote the film and the venues included Kuala Lumpur, Dubai, Hyderabad, Delhi, Mumbai and Kochin.

On seeing the video, fans of top heroes who are doing films under various production houses, fumed and asked the respective companies to learn from Kamal Haasan who has been running the show. After releasing the NFT of “Vikram” in Cannes Film Festival, Kamal Haasan conducted a grand audio launch by having the presence of some of the leading heroes and famous personalities.

The most awaited release of Vikram’s trailer and audio happened recently in the Nehru Indoor Stadium and raised the expectation level of audience to another level. Fans started speculating the story of the multi starrer flick as soon as witnessing the two and half minute trailer.

The trailer and audio launch took place as a huge event with stars such as Simbu, Vijay Sethupathi, Udhayanithi Stalin, Pa. Ranjith taking part in it. Kamal appeared for Super Singer show and in other reality shows and also conducted a press meet for Tamil reporters.

Now, the official social media handles of Raaj Kamal Internationals had updated about the schedules on the promotions of the film at various venues. On 26th of May, Kamal attended a pre release event at Delhi and on 27th, he reached Cochin to promote the film. The actor is also scheduled to appear in the Bigg Boss Malayalam show on 28th of May and on the same day, he is reaching Mumbai for pre release event.

On 29th, Kamal Haasan is going to reach Kuala Lumpur and is planning to attend a pre release event in Hyderabad on 31st. 1st of June, Kamal is going to be in Burj Khalifa, Dubai.

This Kind of promotions We need
For All Upcoming tamil
Pan india Movies 🔥 To Bring Back Our Box-office Record .To shows Who we are To other Industries 😎 Hat’s off To Vikram Team And Andavar 💥

Love it. We need all of our Tamil actors to promote their films like this! How else are we going to get the audience interested in watching it?#KamalHaasan is a veteran actor who doesn’t need to do this but the man is a genius and knows the power of promotion!#Vikram https://t.co/CzE9PUQYf3

You may even dislike Kamal but you have to applaud him for the promotional stuff he’s doing for his film. Breaks all the myth of start value and comes down to promote so vigorously. Note he’s 67. He’s again making a path for people to follow. Hope they do https://t.co/UMVf33uQJ5

I’m sure that no big stars in this generation doing this much things. They believes star values and staying away from events & everything. My man breaks all those stuffs as again. #VikramFromJune3 https://t.co/zFUG9k1U3B

Please learn how to do promo.. If aandavar decides, he will set a benchmark. Not only in movies but also in promo. 💥💥#Kamalhaasan #Vikram#VikramHitlist https://t.co/2eH2V33aGb

I get annoyed when I have to get ready early for a trip , and here’s #KamalHaasan𓃵 travelling literally everyday to different parts of the country and abroad for promotions even in his 60s.

Considering his age and the amount of works he does is just unreal and incredible 💥💥👑 https://t.co/o56Zv0xswC

#Vikram Promotion 💥 .
When we are going to see these kind of promotions for @dhanushkraja 😪@SitharaEnts I’m believing you only . Use it 100% for #Vaathi https://t.co/LODZjAW2Pq

Previous articleRemember The “Emotional” Movie Reviewer Of Telugu Films?? He Got Committed In A Movie!!
Next article“I Adopted Jos Butler As My Second Husband” – Cricketer’s Wife Made It To Headlines

Player of passion, with talent to match, Harbhajan Singh is India's most successful offspin bowler. Purists might mutter about a lack of loop and...