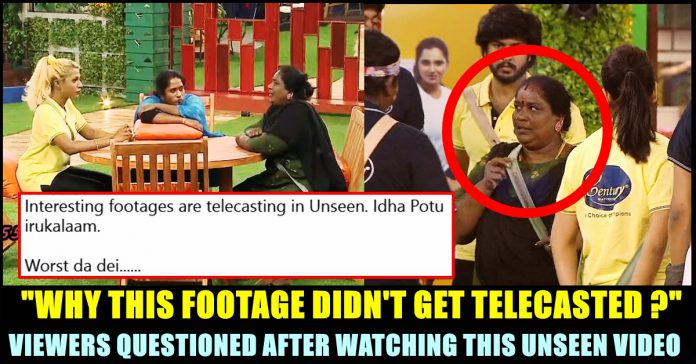 A number of fans criticized the makers of Bigg Boss for not telecasting singer Chinna Ponnu attempting 1 minute long plank in front of Thamarai and Iykki Berry after all the contestants did it during the task in which the former was asked to judge. The elderly singer who hails from a rural place of Tamil nadu, nailed her one minute plank without interruption which grabbed the attention of the netizens. The particular part featured in the unseen episode of the show. Viewers are posting tweets asking why such incidents are not shown in main episode for the mainstream audience to see.

Season 5 of Bigg Boss show successfully entered its 4th week with Kamal Haasan hosting the show by appearing weekly twice. He has been addressing the issues that are taking place inside the house. So far, the show saw three eliminations and a contestant walking out due to unknown reason. Last week, Kamal Haasan questioned Priyanka Deshpande for talking with her co-contestant in sign language. He also clarified issues that took place between contestants during the coin task.

Now, on the 26th day, while providing a task, Bigg Boss asked contestants to part into two groups and perform “plank”. The group which lasts longer will be declared as winners, said Bigg Boss. The team wearing yellow shirt won the task and Chinna Ponnu who was judging the same made the announcement. Meanwhile, a video which didn’t get streamed in the main episode is trending in Twitter with viewers slamming Bigg Boss makers for not featuring it.

“Why Chinnaponnu footage are in unseen most of the time? In main episode.. she is sitting like set property In unseen.. She did ‘plank’ for more than a minute.. She did talk in debate. Why BB team giving a picture like she s doing nothing” a twitter user said in his tweet while seeing the video whereas another one said “Never take anyone for granted”

Why Chinnaponnu footage are in unseen most of the time?
In main episode..she is sitting like set property

In unseen..She did 'plank' for mre thn a minute..She did talk in debate

Seen in Unseen that #ChinnaPonnu performed that task for a minute.
👏🏻👏🏻👏🏻
Interesting footages are telecasting in Unseen. Idha Potu irukalaam.

Unseen – #chinnaponnu holding plank for more than a minute. She must have felt left out as a judge so trying later
Respect 🙌🏼 #BiggBossTamil5 pic.twitter.com/OwvtAvQudJ

Irony of the plank task is that the judge (#chinnaponnu )did the right plank position than all the contestants. #cibi was the closest. Others are joke.#BiggBossTamil#biggbosstamil5

#Chinnaponnu ma DID PLANK MORE THAN A MIN
👏👏💥 BRAVO!
AGE IS JUST A NUMBER 😌#biggbosstamil5 pic.twitter.com/LHXOaC42iE

Comment your views on Chinna Ponnu performing “Plank” for one minute and the reactions it is receiving !!

Investigative Journalist Nakkheeran Gopal continues to reveal the hidden facts behind Kaasi who preyed more than 90 girls. Kasi or Suji is 26 year...