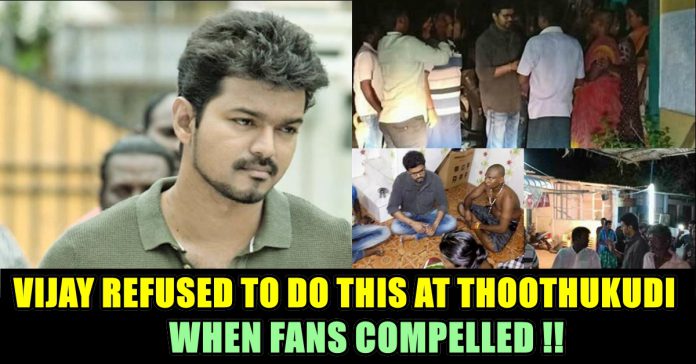 Thalapathy Vijay visited Sterlite plant protest victims’ families in Thoothukudi last night. Apparently, Vijay travelled on a bike to some of the places where the streets were narrow. It is reported that the 43-year-old actor also handed over Rs 1 lakh to each family. Earlier, superstar Rajinikanth visited general hospital in Thoothukudi to meet the people, who got injured during the protest. He had also announced a compensation of Rs 2 lakh each for the kin of victims, who died during the protests. Actor-turned-politician Kamal Haasan, in May, also visited the General Hospital in Thoothukudi, where he met those who were injured in the clashes.

Thalapathy Vijay visited the families of those who lost their lives in Tuticorin Sterlite shootout protest, last night. It was an unexpected move from the Mersal actor, who offered his condolences to 9 families. In addition, Vijay also helped the families financially, with a sum of Rs 1 lakh, each. Onsite sources from Tuticorin revealed us what exactly happened during this visit. “Vijay didn’t want this visit to happen in a daylight, because he felt that his fans might turn up in huge numbers, which will not lead to the intended purpose. Vijay wanted this visit to be a very genuine and honest one, serving its right purpose, and that is why he met them in the night. Still, a few turned up and asked for selfies with him. But, Vijay did not agree for that and asked them to formally follow up with Vijay Welfare Club for meeting and taking pictures with him.”, said the source.

Previous articleOMG : These Two Players Earned 100 Crores Through IPL Alone !!
Next articleThese Women Did What Indian Government Failed To Do In 10 Long Years !! : WOW !!

Not knowing what to do in this lockdown restriction, most people who has nothing to do anything productive in their homes are glued to...

Chief minister Edappadi K Pazhaniswami announced relief fund for the family of the deceased who got killed by two men of the ruling party....

Joe Biden, an American politician who served as the 47th vice president of the United States from 2009 to 2017, has announced Black Indian-American...