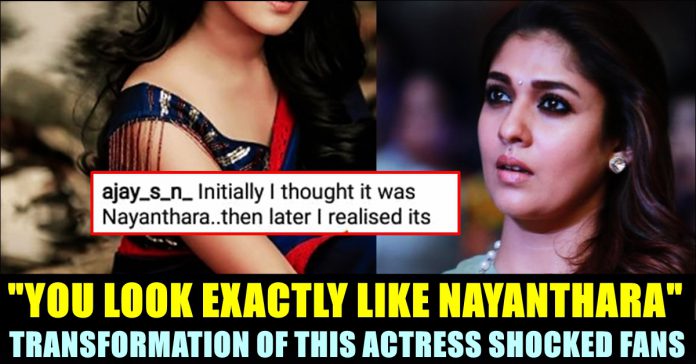 Nayanthara is one of the very few female actors who rules Tamil film industry for more than 15 years. Being the highest paid actresses of South Indian film industry, Nayanthara is also the only actress who manages to act in both female centric movies and hero oriented movies. The surprising fact about it is that the “Bigil” actress shines in both the regions.

In the career which spans more than 15 years, Nayanthara acted with almost all the top actors including with the newcomers such as Sivakarthikeyan and Vijay Sethupathi. Nayanthara is currently enjoying the success of her recent release “Bigil” with Vijay and her previous venture “Viswasam” with Ajith also rocked the box office.

Across her long professional career, Nayanthara got compared with many actresses who happened to be her competitors but the actress is still impressing the audience with her versatility. Now to our surprise, Child actress Anikha Surendran who acted along with Nayanthara in few films is being compared with the actress for her looks and appearance.

Anikha acted with Nayanthara in Viswasam, Bhaskar The Rascal and Naanum Rowdy Dhaan. In Viswasam and Bhaskar The Rascal, Anikha acted as the daughter of Nayanthara whereas she played the younger version of her in Naanum Rowdy Thaan. Anikha who is very much active in social media platforms never missed to upload her photos from the photoshoots she is participating. Check out some of posts here :

Recently she posted a picture of herself in her official instagram account which has more than 6 lakh followers. In the picture she was seen wearing a blue color saree with free hair. To the post she added a caption saying “Stuck in her own cocoon, Wondering what will set her free, She waited for long, Until she came out as a Blue Butterfly…………🦋”

Stuck in her own cocoon, Wondering what will set her free, She waited for long, Until she came out as a Blue Butterfly…………🦋 . . . 📷@vishnu_whiteramp . Costume courtesy: @yaga_designs Styling: @zohib_zayi Makeup : @shibin4865 : @whiteramp_photography @akash_sidharth_ @__keerthana_s . Caption: @_the_twilight_and_the_dusk_

Many of her 6 lakh followers who saw this post compared the looks of the 15 year old actress with Nayanthara. Few of them termed Anikha as “Little Lady Super Star” and “Junior Nayanthara”. Check out some of their reactions below :